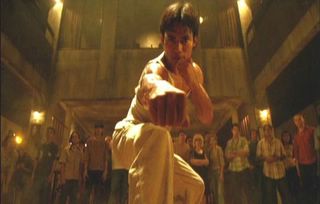 Ok, so you’re a highly trained monk who has studied the ancient way of the Muay Thai Warrior. Your body is a honed killing machine and your mind exercises a great sense of single purpose. So, what exactly would it take to make you flip out and risk your life fighting hundreds of tooled up criminals, several hard as nails prize fighters and some drug enhanced super warriors?
A. Someone looked at you funny and maybe spilt your pint?
B. Your family were brutally murdered?
C. Somebody nicked off with the head of your villages statue?
Basically, it doesn’t matter – Ong-Bak is a film that exists for one reason alone: stunning, crunching fight scenes!!
Hero Ting (Phanom Yeerum or Tony Jaa as he’s being marketed in the West) is the monk in question who takes the task of finding the thieves who steal the head of his villages Buddha. Actually ‘finding and beating the living daylights out of them’ is a more accurate description. If you’re in the mood for to see the best martial arts fights since Bruce Lee strutted his stuff, then Ong-Bak should be the film you seek. Jaa is a sensation, he doesn’t use stunt doubles, computer enhanced effects or even ‘Crouching Tiger’ style wires to make him look good in a fight, he’s the real deal. I’ve never seen a bloke look quite so dangerous, he oozes ‘ability to beat you to a pulp without breaking a sweat’ vibes that guys like Van Damme or Steven Seagal could only ever dream of. In fact, if Ong-Bak doesn’t make you want to find the nearest low life and deliver a ‘Monkey Climbing Heavy Tree’ double knee / elbow smash to the head then I’d ask for your ‘Ong’ back…
The director (Prachya Pinkaew) keeps the tempo up with some genuinely funny chase scenes, a little light love interest and a sidekick comic called ‘Dirty Balls’. He also cheekily courts a collaboration with a more well known director by having messages like “Luc Besson we are waiting for you” and "Hi Spielberg, let's do it together" blatantly written on walls which the action passes.
Ong-Bak is a powerful calling card, alerting the world to the presence of an amazing talent and it would be a crime if Tony Jaa didn’t move up to become Hollywood’s first choice kung fu ass kicker. Now I must go and meditate before practicing my ‘Strangling the Great Elephant’ moves – you can never be too careful!!

Darkmatt Rating: ööö (beating never looked as good as this)
Reviews of other films and stuff you might want to read indexed here
Posted by Matt Adcock at 9:38 pm