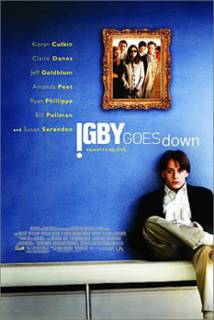 "your going down pal"

No – not some kind of BJ documentary about someone named Igby but rather a kind of modern Catcher in the Rye style tale in a New York environment. This is a fun film – as long as you like your films tragic and full of dark humour. Igby (played by Kieran Culkin) is a young man with a truly awful family. Nazi-ish golden boy older brother (Ryan Phillippe), mental father (Bill Pullman) who set his sons an example by losing the plot and getting locked away in an asylum, scary socialite mum (Susan Sarandon) does things like sit on the maid’s head when she’s stressed… Yes this is wacky film on every level. Jeff Goldblum is on top form as D.H. – Igby’s godfather who’s banging foxy young nymph Rachel played by Amanda Peet. The other babe here is Sookie (Claire Danes) – and whilst Igby gets to bed both of them in the course of the film, this is anything but a romance.

The dialogue is just great though – many of the lines will stick with you for some time, like when Igby’s older brother tells him “I think if Gandhi had to spend a prolonged amount of time with you, he'd end up beating the shit out of you, too.”

And in turn - Igby’s made up story about his brother. “He was ten-speeding a gazillion miles per hour through Central Park. You know, racing with all the other young Turks. When, all of a sudden he caught a glimpse of himself in the handlebar mirror and became so... aroused by it that he burst his Speedo shorts and got caught in the gears and threw him right on his face. Splatter.”

Igby has a line for everyone – from his answer to: “Why aren't you in school now?”… he replies: “ Sheer ingenuity!”, through his assorted attempts to hit on the women – “Uh yeah, I guess eleven is a bit young, but you sound older on the phone” etc…

It won’t be everyone’s cup of tea, but I was sold out on this kind of ‘long dark tea time of the teenage soul’

Darkmatt Rating: öööö (laughter in the dark)
Posted by Matt Adcock at 5:59 pm