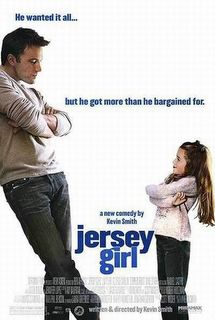 "a Kevin Smith film for all the family?"

Forget about who you thought you were, and just accept who you are - this is the underlying moral of Jersey Girl, the first Kevin Smith film that I've been able to watch snuggled up with my wife (we have very differing tastes in films- I'm all Die Hard and True Romance, she's Slipper and the Rose and Bridget Jones).
As a fan of cLeRKs, Mallrats, Jay and Silent Bob Strike Back etc, I wasn't sure how Jersey Girl would play but it manages to retred the well trodden path of romantic comedy / single parenting / life choices without feeling cliched or too twee. And because of the strongly written, heartfelt issues it delivers an amusing enough couple of hours entertainment. 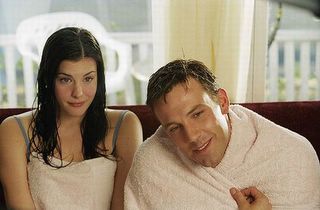 "I'm kinda crushin' on you right now"
Darkmatt Rating: ööö (fun - especially if you're a parent)
What is also cool about Kevin Smith is he now has a blog - where he posts things like his early review of Revenge of the Sith etc - with interesting background like:
"First off, never… never… see a movie as geeky-cool and momentous as “Revenge of the Sith” with a room full of marketing stiffs. While I “WOOOOOOOOOOOOO-HOOOOOOOOOOOO!!!!”ed throughout the screening at stuff only the most moribund wouldn’t be able to muster the enthusiasm to scream over, I stood alone. The only tepid interactive acknowledgment this sad little group could muster was a perfunctory smattering of near-golf claps for the Fox logo at the head of the film - and even that felt forced (pun intended). But fuck ‘em - their disturbing lack of faith couldn’t ruin this movie for me."
Link to Kevin Smith's Blog http://newsaskew.com/blog/
Reviews of other films and stuff you might want to read indexed here
Posted by Matt Adcock at 9:12 am