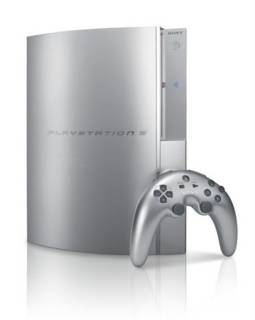 "The Future is HERE"
I'm not kidding... This is it... Sony has unveiled prototypes of their new Playstation 3 console at the Electronic Entertainment Expo (E3) in Los Angeles. And it's a beauty!! Wait, what's that I hear?
It's the sound of Bill Gates and every Xbox fan on the planet screaming in fear, rage and humiliation!!
The PS3 is so much more than games console, but significantly it's also so much more than the Xbox 360 (on pure stats alone it's twice as powerful) - the PS3's Cell processor - jointly developed by IBM, Sony Group and Toshiba can produce two teraflops of computing power...
What else?
BlueTooth support for up to seven wireless controllers and the new BD-ROM (Blu-ray Disc ROM).
Launch games like Tekken 6, Metal Gear Solid 4 and a new Grand Turismo.... yes please!!
I know which next-gen console I'll be buying... PS3 - the only choice!!
Earlier post about Xbox 360 vs Playstation 3 with Xbox 360 photo
Posted by Matt Adcock at 7:31 am

Damn straight Matt. I think MS are shooting themselves in the foot aiming so low and not even thinking of putting in new DVD technology. Sony are showing their mastery of the games console market and I think they'll take this next gen war.

They're openly relying on Halo 3 as the killer game, but to be honest Halo 2 was poor compared to the original. Typically MS they relied on hype and marketing and cleverly disguised the horrendous shortcomings of the game. Feel free to check out the review on my site!

The Xbox 360 will kill. How many hard-core gamers will wait till '06 to buy the Ps3. the Ps3 will cost more and unless your Bill Gates you won't be able to buy this console and a couple of games. personally i am buying a Xbox 360 and i believe it will win this next-gen war.

Anyone who is a true gamer will buy PS3 over xbox360 plainly because its better. its not gonna matter how much anything costs as long as its better. no offense to the guy above but that was a pretty stupid comment you made. The only reason Playstation wouldnt win the next gen. war is beacause of Halo's popularity and microsoft going below the belt with them releasing 360 very close, if not on the same day, as Playstation 3's launch.

I meant to say that microsoft was releasing Halo 3 close or on the same day as Playstation 3's launch. sorry about the typo.

And exactally how many ingame videos or screenshots has anyone seen on the PS3??? Nothing. Just vids made on PCs, whereas the 360 has actually released ingame footage that looks breath taking. Condemn the 360 when sony can actually be bothered to give any info on the ps3 apart from specifications and "inside information" on "how much better than the 360" it is.

i think the 360 will dominate the next-gen war on a number of different fronts. firstly, the custom GPU in the 360 was designed and built from the ground up; it's not some re-hashed version of a current-gen GPU such as the PS3's GPU. i'm not going to go too far in depth about it, but needless to say the 360's GPU bends the PS3's "RSX" GPU over and orders it to grab it's ankles (my AIM sn is: "im not patches", IM me and i'll go all nerdy-tech talk on yo ass). i'm about to go see "the chronicles of narnia" so i'm going to have to cut this shorter than i wanted. the second, and final for now, reason the 360 will spank the PS3 is the simple fact that the 360 debuted a whole entire year before the PS3 will appear stateside. look at what the release advantage of the PS2 did over the XBOX back in the early 00's, even though the XBOX was technologically superior and more innovative than the PS2 (Xbox LIVE, hard drive, etc. i'm not talking looks, the PS2 did pwn the XBOX on asthetics). this whole PS3-360 debacle is just a repeat of the PS2-XBOX fiasco. bottom line: the 360 will own sales figures until the next-next-gen war primarily because of it's early release date, even if it wont be technologically superior to the PS3.

Hey, nice blog about ps3.. but, i think you should update it regularly.

I agree, nice blog, but it needs some updating.