Revenge of the Sith... immediate reaction 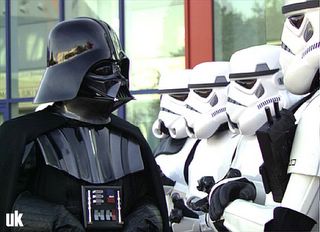 "Bring me the film reviewer known as Darkmatt, he's just stolen the plans to our new film: Revenge of the Sith
- so I want him alive!!"
Have just got back from the press screening and what can I say?
Revenge of the Sith is
THE DEFINITIVE STAR WARS EXPERIENCE...
If you've ever held even the tiniest amount of appreciation for Star Wars (old or new) - Episode III will blow your socks off, put a smile on your face and bring balance to the force i.e. IT FREAKIN ROCKS!!
More considered review to follow... 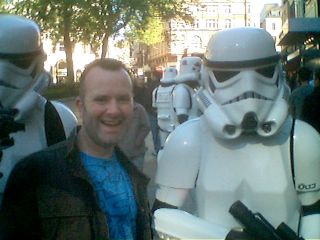 "Sir, we've apprehended the suspect film reviewer
and will bring him in for questioning but he doesn't look too worried
- keeps mumbling something about having just seen the most awesome film in the universe!!"
Posted by Matt Adcock at 3:02 pm

That has to be the best news in the world!

I'd seen the trailer and thought "hey this actually looks... good!" but worried it would be another CLONE nightmare. I can't WAIT now!!!