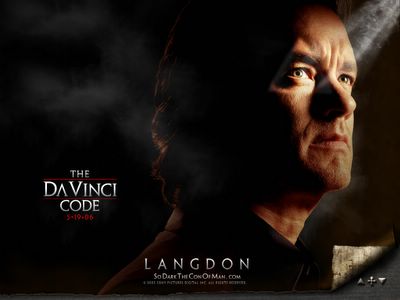 "is that bad smell me, or the film in general"

I am risking my life here to bring you the truth; a message so shocking that powerful forces are working to prevent it being exposed to the world.
In this last week I have been accosted by monks at King’s Cross, contacted by shadowy organisations and looked at funnily by some of my new work colleagues at the Institute of Leadership and Management – actually that last one might not count…
Anyway I fear that I can’t simply blurt out the message, so instead have tracked down a line from an ancient hidden manuscript which reads: “Brutus quack comic you pompous twit Vinci.” My studies have found that It holds the secret in reverse about this film but can you break the code?*
Anyway – according to Dan ‘sold more books than had hot dinners’ Brown, we are in the middle of a war. One that has been going on forever to protect a secret so powerful that if revealed it would devastate the very foundations of mankind. This fictitious secret unlike the real one I’ve been trying to convey has been causing religious controversy the world over. The thing is – it’s just a story, it’s not real… And if the outburst of unexpected laughter by the audience when they heard the preposterous ‘shock’ announcement at the climax of the film was anything to go by – it looks like this is unlikely to dupe any but the most simple minded of viewers.
Alas director Ron ‘A Beautiful Mind’ Howard has fumbled a potentially explosive experience, turning in almost three hours of mind numbing mumbo jumbo. Tom Hanks is all at sea for once too as icon expert Robert Langdon and even the lovely Audrey Tautou can’t maintain viewing interest. The only people having any fun are Paul Bettany as the nutty ‘hit monk’ assassin Silas and Sir Ian McKellen who goes nicely over the top as the enigmatic Sir Leigh Teabing. In fact you have to wonder if Hank’s hasn’t slipped out of character and is pondering his career when he utters the line: “I'm into something here that I cannot understand.”
Don’t believe the hype - this dose of monk(ey) business just isn’t worth your time or money.

*Help me I can’t break Matt’s code: Take the last letter of each word in the quote – starting with the last word and work backwards to reveal the hidden secret about the film…

Action öö - lumbering and less tense than picking your nails
Laughs ööö - unintentional but tendium relieving
Horror öö - self mutilation is not big or clever kids
Babes ö - move along, nothing to see here

"one of the audience did this to himself to try and stay awake!"

Interesting review Matt, and I think we're going to disagree somewhat for perhaps the first time ever!

I really don't think Ron Howard did a bad job, I clearly put the fault at the door of the book, the material is simplistic and poorly written. I think the Harry Potter books are aimed at an older audience than Brown's. It's also completely see through.

However the film does a good job with what it's given. You're right about the revelation delivery, I forgot to put that in the review, but apart from that I think Hanks does a nice job of portraying the character from the book and not another Hanks character.

It's no masterpiece but it's a pretty good thriller, drastically hindered by the poor source material and the fact that almost everyone alive has read the book so knows every single twist and turn.

agreed, it wasnt that bad at all.

i dont think you were in the same film