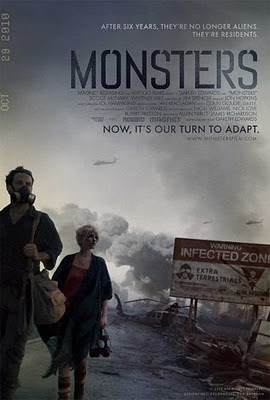 We are getting reports that a NASA probe carrying alien samples from Europa has crashed somewhere over Mexico… It seems that the resulting infection has led to massive squid like creatures running rampant – destroying everything in their path, leaving half the country needing to be quarantined. So by the looks of it, all that ‘We come in peace’ talk was complete rubbish.

Monsters sees a young couple having to make the hazardous trek through the alien infested ‘Infected Zone’, risking their lives to try and get back to the US after becoming stranded in South America. Photo-journalist Andrew Kaulder (Scoot McNairy) makes a living getting shots of the aliens and the death and devastation they cause. He gets lumbered with having to babysit his boss’s daughter - engaged American tourist Sam Wynden (Whitney Able) and escort her safely back to the US border… But as she’s a blonde hottie, he starts to develop feelings for her, as is only natural when at any moment you could be eaten by giant extra-terrestrials. 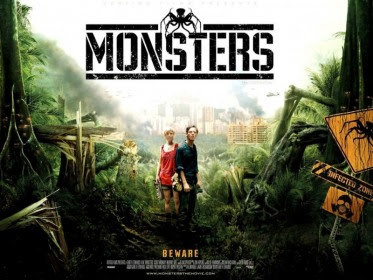 Director Gareth Edwards makes his debut with this cool indie sci-fi creature feature which delivers not only the freaky sci-fi ‘Monsters’ of the title but also an impressive human emotional payload. On the surface Monsters sounds a lot like the recent ‘Skyline’ – a film made on a shoestring budget by film makers who have cut their teeth in special effects development. Both films deliver on the effects but where Skyline failed with weak plot and hammy acting, Monsters delivers by sucking you in with believable characters and a compelling story of likeable people, falling for each other whilst in peril.

McNairy and Able make a cute, believable couple (which isn’t so surprising when you realise that they were dating whilst making the film and are now married). The ‘Monsters’ are fascinating too – even though we rarely get to see too much of them apart from a few key attacks and bold alien mating sequence.

The atmosphere of sustained menace makes up for the slow pace, Monsters is a film to savour and the not so hidden subtext about the US heavy handed attitude to the aliens adds plenty to ponder after the end credits.

Monsters could well gate crash many sci-fi fans top ten films of the year and proves that creativity can win over budget restrictions. After the spectacular but overblown AVATAR, Monsters is a refreshing alternative that gets inside your head and wreaks some pleasing destruction. Recommend viewing.

The alien monsters from Monsters are rounded up and pitted against the mutant alien beasties from Skyline - for a 'winner takes all' smackdown...

I was very intrigued by this movie's release pattern (was available on demand and online at the same time it started hitting theatres). Gave smaller markets a chance to see a film that was the source of a lot of chatter.

I loved this movie, and couldn't help but grin at its slight bait-and-switch nature. It brings you in believing that you're about to watch a "Mexican DISTRICT 9"...and then hands you a quiet, introspective road movie.