Review - Chronicles of Narnia: Voyage of the Dawn Treader 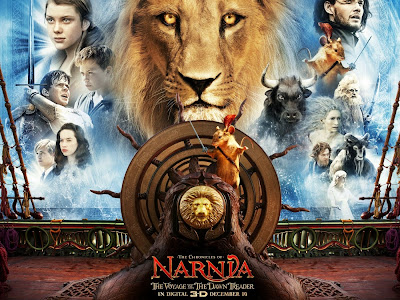 The Chronicles of Narnia: Voyage of the Dawn Treader (PG)

“You have returned for a reason. Your adventure begins now...”

All aboard the fabled ‘Dawn Treader’ – the mighty battleship
captained by the valiant King Caspian (Ben Barnes) for a trip back to
Narnia. Following on a few years after Prince Caspian, Voyage of the Dawn
Treader sees the younger Pevensie children, Edmund (Skandar Keynes) and
Lucy (Georgie Henley) transported back to the magical realm along with
their sniveling cousin Eustace Scrubb (Will Poulter).

Narnia is under threat again but this time not from an evil king intent on
battle or the wicked White Witch (although she does make a fun cameo
appearance). The danger this time is that a strange evil green mist is
devouring the populace – so the young heroes must confront various
challenges in order to retrieve seven magical swords and free the kingdom
again.

With invisible giants (who might not be all they seem), vicious slave
traders and a climactic battle between a massive scary sea-serpent against
a golden dragon – there is plenty of action on offer. Lucy and Edmond
each have their characters tested as they face the temptations of being a
‘real man / real king’ – for weedy Edmond and of being ‘gorgeous
like her older sister’ – for buck toothed Lucy (who looks a lot like 'Mater' from Cars at times).
These trials add an extra dimension to the battling “for Narnia” and the not so hidden faith allegories which are present and correct as in the two previous films.

Anna Popplewell = What Lucy would like to be...
C.S Lewis’s imaginative third book is brought to impressive big screen
life, keeping up the high production values and slick special effects
heavy drama. The plot has been chopped and changed to make it all flow a
bit more easily and there are far more action scenes (which may not please
purist fans of the original text) but the end result is a rousing Narnian
romp that keeps the series rolling along nicely.

The Narnia films offer quality child friendly fantasies which pack enough
thought provoking deeper messages to set them apart from the mass of brain
shrivelingly bad festive kiddie flicks. Voyage of the Dawn Treader is a
journey worth taking, although not necessarily in 3D which adds very
little except to the cost of viewing.

Darkmatters review of The Chronicles of Narnia: The Lion The Witch and The Wardrobe

Darkmatters review of The Chronicles of Narnia: Prince Caspian

Dawn of the Voyage Treader WIKI
Posted by Matt Adcock at 10:36 pm