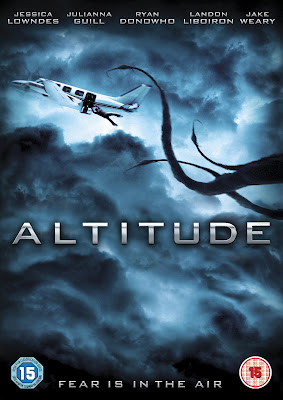 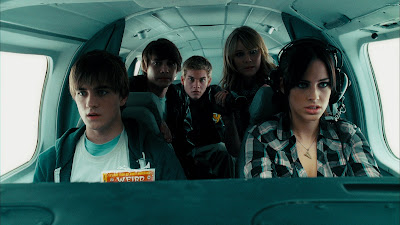 "Boldly going where no teens have gone before..."
It’s hard to sum Altitude up in mere words – maybe you should watch the UK trailer before reading on:

The plot sees rookie pilot Sara (Lowndes) taking to the sky with some pals, only to lose control of the plane as they hit some freak weather. And when I say ‘freak’ I mean a diabolic storm that is home to a strange, angry and homicidal malevolent creature. It’s a clever play on the fear of flying mixed with a huge Lovecraft-esq tentacle spouting beastie.

For maximum enjoyment, don’t try to think too much about the plot – just sit back and lap up the teenagers in peril suspense which is nicely worked. Altitude has been likened to Donnie Darko or Twilight Zone which isn’t entirely unfair – it’s a movie that takes the themes of fear and the power of the imagination to terrifying new ‘heights’. 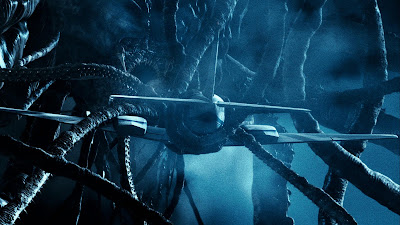 "The plane hits some WTF is that turbulence"
The DVD comes packing some decent Special Features too which include: audio commentary by director Kaare Andrews; Altitude: Behind The Scenes; Green Storm featurette; original concept gallery; trailer; 2.0 Stereo and 5.1 Dolby audio options.

Overall Altitude is a confirmed cult classic B-movie horror that delights whist you watch it and is forgotten the seconds the credits roll.

Is the monster at least cool, or is it onscreen for basically a minute or two and then gone?

Hhmmmm - without wanting to give too much away, you do get to see the monster but it's only for a minute or two... Don't think the budget would stand for any longer!?

Sweetsauce123 said...
This comment has been removed by the author.
2:48 am

I'm pretty sure the creature featured in this film is a mythological creature named, "Cthulhu". i believe that is what he is..but not completely sure. Look him up and see what you get on google images it's quite interesting. :P