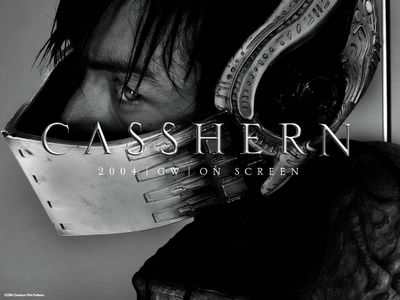 "The latest in facial armour... not great for easy eating though"

Reviewed by Matt Adcock
Watching Casshern put me in mind of these lyrics from Embrace...

…the other side is out of reach,
its nothing you can change
and everything won't work out in the end,
you'll realise the world is not your friend,
there's nothing that you've broken you can mend…
Embrace ‘This New Day’
Earth – the near future… Thanks to another dodgy piece of Bush style ‘world policy’ we humans have managed to turn most of the globe into a wretched war zone. Then to make matters worse we inadvertently create a new race of Neoroids who enslave us using an army of rebellious super-robots originally designed to help civilization avert a complete ecological cataclysm.
Stop me if you’ve heard this one before… Anyway, mankind's only hope is Casshern, a legendary hero who wages a solitary battle to defeat these Neoroids and restore the Earth to its rightful order. Ironically, Casshern's father is the same scientist who engineered the race of super androids now threatening to destroy all of mankind. On a crusade to clear the name of his father, Casshern must sacrifice his own humanity in order to attain the powers he needs to defeat mankind's powerful enemies. But Casshern’s power does not come without a price. Haunted by the memories of his murdered mother and forced to deal with a super robot that has absorbed, and now manipulates, the consciousness of his father, Casshern must put aside his own emotions and fight to preserve the survival of the human race.
This is a serious contender to be remade by the Wachowski brothers – killer robots in a blade runner like war torn future world. A hero who is ‘the one’ in an advanced suit of body armour. An extraordinary tale of science fantasy and social relevance which is pretty hard to describe? Yes Casshern might be the story of man's best laid plans paving the way to potential destruction but it tries to moralise about the horror war when I was just hoping for more of the superheroic action…Visually sumptuous and worthy of your time – this is a ‘near miss’ which could have been fantastic in a more capable directors hands.

"getting the girl, killing the baddies and saving the entire planet - Casshern"

"Super robot gets a 'splitting headache' thanks to Casshern's attack"

Sounds like the perfect facial armour for a successful diet :p
Lots of eye candy in movies these days, and unfortunatly just as many without a good story line.