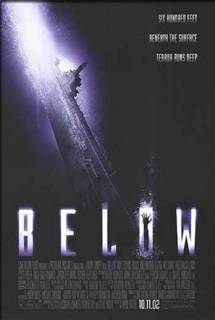 "an express elevator to hell"


“Try not to fraternize with the men. They can be a little... strange.”
“Strange, as in superstitious?”
“As in ‘strange’."

Welcome to a cool, nerve jangling submarine thriller in which there is more than just the threat of mines, depth charges and torpedoes at stake – this sub has got a malign presence which is making things go ‘bump in the night’ – but where can you hide when you’re six hundred feet beneath the waves?

There is a lot to enjoy here – just about every WW2 cliché gets a good going over with some additional dangers thrown in for good measure. The tense atmosphere on board the sub is really well handled and the frights are of the ‘music announces them a mile away’ type but still effective. Some excellent shots of the sub itself and a good eye for framing the scenes for maximum impact puts lifts this B movie up with the best sub films - Crimson Tide, Hunt for Red October etc...

Dexter Fletcher pops up as a Brit survivor along with London born Olivia Williams. The yank crew are standard off the shelf characters but they do get some cool dialogue – at one point they ponder whether they’re all actually dead which is fun.