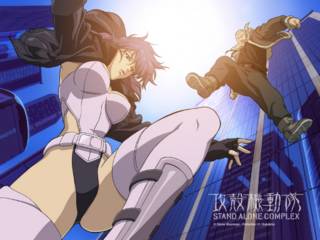 Step this way for a cool dose of cyberpunk, anime crime fighting, existentialism and a heroine who thanks to having a 'cyber' body is pretty uninhibited when it comes to dressing sensibly...

The plot of this TV series assumes that the events of Ghost In The Shell (1995) never happened, and is thus an alternate timeline. It has some lovely quirky bits like the text that appears around a "Laughing Man" icon shown quite often in the show; "I thought what I'd do was, I'd pretend I was one of those deaf-mutes." which is a line from J.D. Salinger's "A Catcher in the Rye." etc - so it's not perhaps the low brow blatantly sexist cartoon that you might have been expecting... 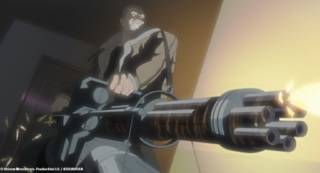 I loved both the Ghost In The Shell films and apparently there are 26 episodes of this - so having just watched the first 4 on my PSP, I think I'm hooked for the duration.
This is a great intro for people who may have never tried anime... and despite having a few annoying bits (what are those child voiced robot tanks about eh?) - the artwork is of a high standard, the plots interesting and the female is um, well, she reminds me of my wife!!
Darkmatt Rating: ö ö ö ö (cool)

Read my review of Ghost In The Shell 2: Innocence
Posted by Matt Adcock at 1:22 pm