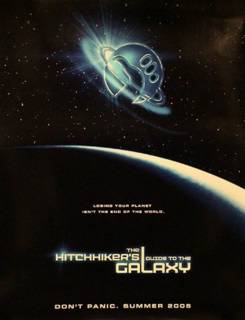 
Over two decades in the making, the big screen adaptation of The Hitchhiker’s Guide To The Galaxy hits the UK this week and it carries a huge weight of expectation from fans of Douglas Adams’ book trilogy (in five parts), a TV series and the original BBC Radio show.

This quirky British sci fi is probably the closest we’ll ever get to "Monty Python in space" and it stars Martin Freeman as the archetypal Everyman, Arthur Dent. Dent has to face the prospect of having his house bulldozed, discovers that his best friend is an alien and then finds out that the whole of planet Earth is about to be demolished to make way for a hyperspace bypass.
So how did Martin feel about taking on this iconic role?
Freeman: "Well, I went back to the books and decided I needed to put my stamp on the role. We had a great screenplay, so basically after I got the part I just had to get the hell out of the way and let the story come through! I heard that Bruce Willis was up for this part but that’s fair enough because I’m going to do Die Hard now…"

Trillian (Zooey Deschanel) is Arthur Dent’s love interest in the film – is Hitchhiker’s actually a kind of sci fi romance?
Deschanel: "Yeah it is the ultimate romance, a really nice romance that ties a lot of the elements together. It was so much fun to make too. I am honoured to be a part of it - back at school it was the book that the cool kids read."

Talking of cool, British actors don’t come much cooler than Bill Nighy (Love Actually, Shaun of the Dead and next year Pirates of the Caribbean 2) who plays Slartibartfast a planet builder. If he could redesign earth, what would he change?
Nighy: "I’d lose the English Channel – it’s not good for our manners or our language skills to be stuck out here. Also I’d maybe lower the temperature a touch, make it a little bit cooler in the Middle East, it might not work but it’s worth a try."

Hitchhiker’s has a wonderful mix of special effects, some cutting edge CGI work but also older style effects work – I asked the director Garth Jennings if this was a budget issue or a style choice?
Jennings: "I didn’t want to compete with the big CGI heavy movies coming out this year. We tried to be inventive in our use of special effects - this is like old Star Wars as opposed to new Star Wars. And even if we’d had double the budget I like to think we’d have approached it in the same way."

One of the key effects is giving Zaphod Beeblebrox (Sam Rockwell) two heads and three arms. How did he find acting that part?
Rockwell: "It was pretty wild. Well apart from having 10lbs of Matthew McConaughey (2nd head) on my head, which was an interesting dilemma for an actor. I mixed some Bill Clinton and George W Bush into the character. I’ve always loved the British sense of humour too, I mean I was raised on Monty Python."

Wow, I have a HUGE crush on Martin Freeman, AND am a die-hard fan of the Hitchhiker's series. Can't wait to see this film... Also, that's wonderful that you get to interview Fred Alan Wolf. I'm reading Brian Greene's The Elegant Universe right now (string theory, mostly); not as familiar w/ Wolf, except for the film. I think I'd want to ask Dr. Wolf about his religious background (or lack thereof). Also, as physicist Victor Stenger has argued, aren't the workings of the mind too large, so to speak, to be influenced by quantum effects at all? Planck's constant and all that (what I'm reading about right now). Anyways, thank you for letting me know about the interview, and I look forward to reading it! -A.A.