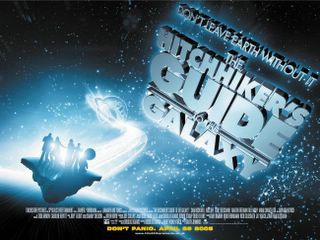 "so long and thanks for all the fish"

The Hitchhiker’s Guide To The Galaxy (PG)
Dir. Garth Jennings

“Attention, people of Earth. I regret to inform you that in order to make way for the new hyperspace express route, your planet has been scheduled for demolition. Have a nice day.”

Don’t Panic! – you still have about 12 minutes left… more than enough time to down a couple pints, say goodbye to friends (at least one of whom might turn out to be an alien) and then stick out your intergalactic ‘thumb’ and hitch a ride on a passing spaceship just before the earth is disintegrated!!
Of course from then you’ll need luck, bravery and preferably a copy of The Hitchhiker’s Guide To The Galaxy if you’re going to survive. The ‘Guide’ in this first big screen outing for the late great Douglas Adams’ classic comedy sci fi, is a sort of super PDA – imagine the lovechild of a Sony PSP and IBM’s Deep Blue supercomputer – voiced by Steven Fry. It details just about everything you might want to know about in the universe and is slightly cheaper than the Encyclopaedia Galactica.

Arthur Dent (the perfectly cast ‘everyman’ Martin Freeman or ‘Tim from The Office’ as he’s best known) is the unlikely hero who gets to travel the galaxy in his pyjamas, face down hideous aliens (and their unspeakably bad poetry) and try to win the heart of Trillion (Zooey Deschanel an unemployed Earth astrophysicist / certified sci fi geek’s pin up after this). The Hitchhiker’s Guide To The Galaxy or H2G2 as it’s sometimes called blazes a trail for British sci fi – showing that Dr Who is not alone in this pretty empty area of the entertainment universe. It might not have the budget, the special effects or the action of certain other sci fi films coming out this year, cough *Star Wars* cough, but by-Jove, H2G2 is going to whip the others when it comes to being the funniest!!
That’s right – poster quote time:
“Hitchhiker’s is going beat the living crap
out of Star Wars: Revenge of the Sith
and War of the Worlds combined”
- if assessed on which film is the funniest… 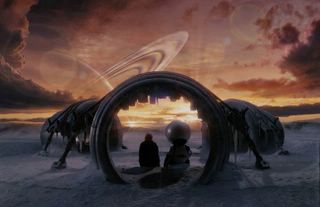 Fans of the books, radio and TV series’ may be divided as to how they feel about the new Marvin the paranoid android (still paranoid, still has brain the size of a planet – but now a head almost a big to match). Or Zaphod Beeblebrox (a spot on, hyper annoying turn from Sam Rockwell), as the ex-hippie, thrill seeking, double headed President of the Galaxy who’s many claims to fame include inventing the Pan Galactic Gargle Blaster – a drink that feels like having you brains smashed out by a gold brick wrapped in lemons – and being voted the Worst Dressed Sentient Being in the Known Universe for a record seventh time!
Other highlights include a nicely sinister John Malkovich as new character Humma Kavula and the wonderful Bill Nighy as Slartibartfast – planetary construction engineer par excellence…
Hitchhiker's is a marvellous film, Jennings has done a great job of fusing the off the wall elements and I think that Adams would have been proud of what has been achieved with his creation. Yes it has a slow pace and some of it is highly indulgent - but it's almost impossible not to get caught up in the infectious madness that shimmies across the screen. You might not find action but you will find the answer to life, the universe and everything – which is a fair trade I think!! The online site for H2G2 (http://hitchhikers.movies.go.com/ ) is a thing of beauty too, where you can even ask the ultimate computer - Deep Thought - a question although you may not be surprised by the answer… So, all things considered, I’d advise you to bring meaning to your existence by going to see The Hitchhiker’s Guide To The Galaxy at your earliest convenience – just make sure you know where your towel is!
Of course alternatively, you could just lie down on the floor with a paper bag on your head and wait out your last 12mins of existence instead - but it won’t help…
Darkmatt Rating: öö42öö (essential viewing)
Matt Adcock Meets and Interviews the Hitchhiker's Cast
Other film reviews by Matt Adcock
Posted by Matt Adcock at 8:48 am

Ah! I've been waiting for this post. (Nice to see one without a scantily clad woman in it for a change too!)

This film is definitely on my "to see" list but did you not feel like you were watching the space remake of Love Actually?

Cool, but what did you think of the film Matt? Have you seen the series and how would you rate it as a movie, and in comparison to the series\books?

As a film - it's a wonderful mixture of ideas, scrambled and endearingly British in that you have to let it wash over you...

For me it felt 'true' to the source material and yet also managed to be more accessible than the TV series (whose Marvin gets a cameo in the film)...

So the movie is a 'must see' if even remotely curious / a fan, but the books will still be #1 for me and the film has made me want to re-read them!!