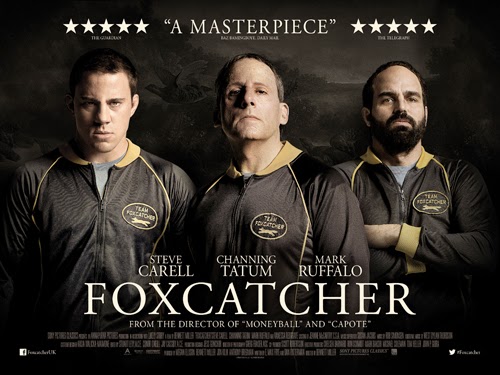 If Jaws isn’t really about a shark, Tinker Tailor Soldier Spy isn’t really about spying, then Foxcatcher is definitely not about wrestling. Indeed, if the glittery lights and excess of America’s favourite ‘sports entertainment’ WWE is what you’re expecting, then you might want to take a deep breath and readjust your expectations. But that isn’t a negative, for Foxcatcher is one of the bleakest, most downtrodden films you’ll have seen for a long time. And it’s glorious.

After previously tackling other real life ‘true stories’ in the excellent Capote and Moneyball (rarely seen in the UK due to the Baseball content – but well worth a watch), director Bennet Miller has now turned his attention to a little known story (outside of the USA) of obsession, desire, family, wealth, and wrestling. It’s much darker than his previous efforts with unnerving events unfolding on screen with characters that it isn’t particularly easy to like. It’s testament to Miller therefore that it’s so expertly shot and edited, with startlingly full-on performances from the entire cast, that it can't help but get under the skin and stay with you long after the credits end. 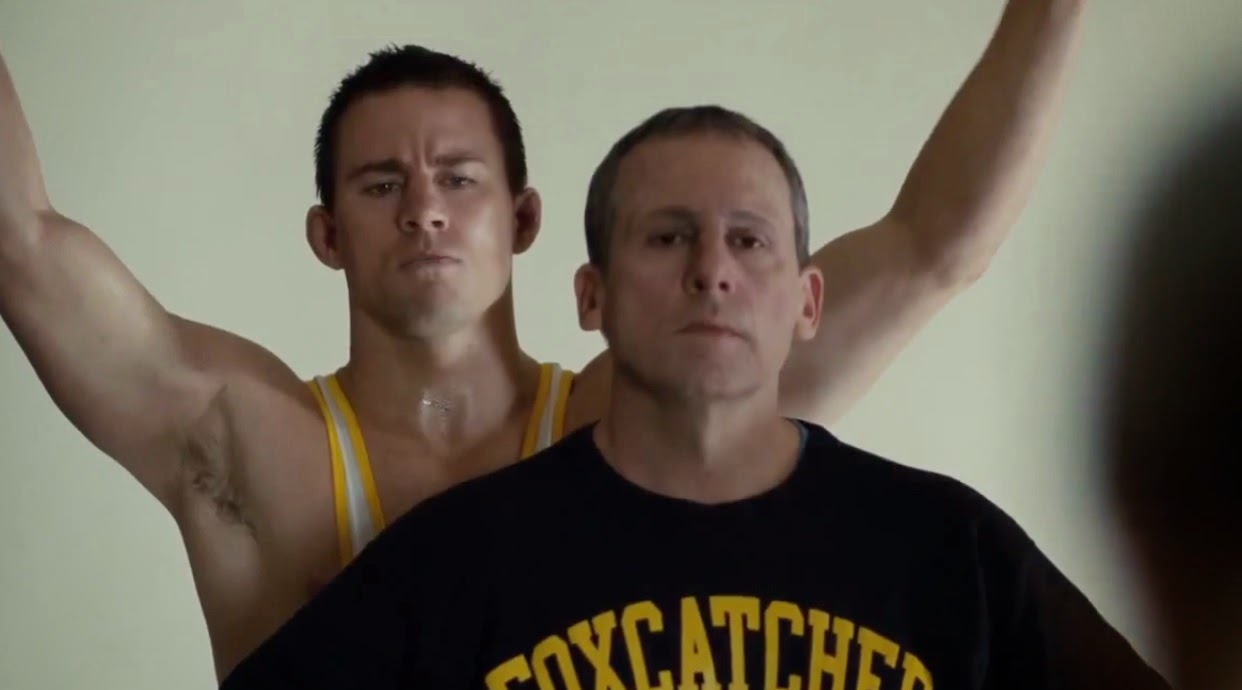 Foxcatcher begins in subdued form, after the 1984 Los Angeles Olympics where Mark Schultz (Channing Tatum) and his big brother David (Mark Ruffalo – who let’s be honest, is great in everything) both won gold medals for wrestling. It’s a bleak opening with Tatum barely uttering a word in the first half an hour. Instead we are introduced to our main players as they silently warm up before a wrestling session. In a remarkable sequence, we learn more about the characters and their relationships from their physical battle than we would in hours of dialogue and exposition. It becomes clear quickly that Tatum is desperate to elude the large shadow of his successful brother Ruffalo. In a superb understated performance, Ruffalo manages to be everything that you’d want from a leading man – but in a supporting role. He’s kind, he’s relatable, he loves his wife and children and he is desperate for his brother to succeed. Tatum on the other hand is sullen, brooding and introverted. It’s a great pairing with fantastic award-worthy performances from both – in particular, have a look at how they’ve transformed their walks with great physicality.

In order to achieve his next goal, Tatum needs help with funding to train for Seoul 1988, and this turns up via a remarkable offer from billionaire John du Pont (Steve Carell) to start a wrestling team at his vast Foxcatcher estate in New England, which is known for the championship horses managed by du Pont’s imperious mother (Vanessa Redgrave). At the beginning, David decides to stay with his family, and Mark heads off by himself to train with du Pont. What begins next is a slow evolving story of Mark initially being seduced by du Pont’s wealth and ambition, only to later be repulsed by it. 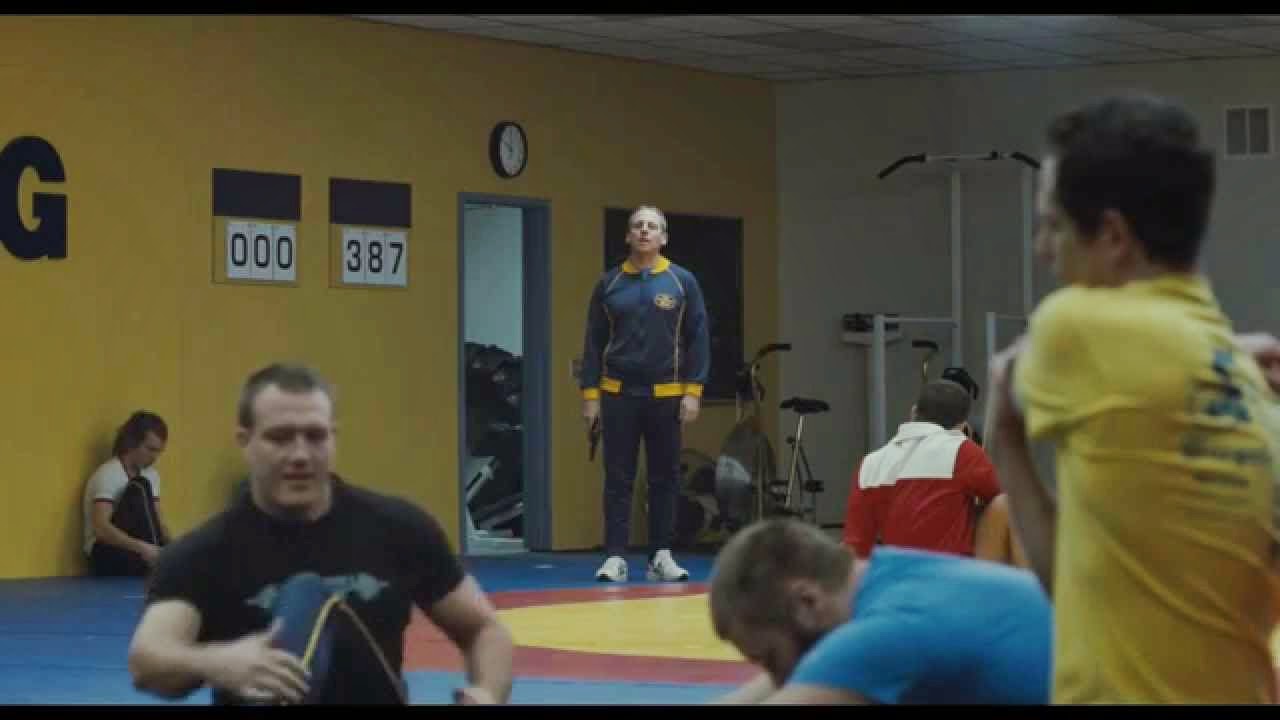 "anyone want to try the 'bullet jumping' method?"

In his career defining ‘serious’ role, Carell is breath-taking as du Pont, it may be quite some time before you even realise it’s him behind the prosthetic nose and teeth. Carell cleverly plays the role with an insinuating glint that makes us wonder what he's up to, and his wrestlers see it too, yet go along with his bizarre nature simply because the money is so good. Carell is genuinely terrifying because his performance burns so slowly. But du Pont is not simply a pantomime villain; the strength of Foxcatcher is that it makes du Pont desperately sad at times. One sequence where du Pont horribly leads a wrestling training session in order to impress his vacant mother is heart breaking and terrifying all at once.

Throughout its (long) running time, Miller and screenwriters E. Max Frye and Dan Futterman cleverly subvert every scene with suggestions that something is deeply wrong here. Du Pont’s ‘rousing’ speeches are filled with foreboding, hinting that the film could erupt into a horror at any moment, and the sense of unease steadily grows. By refusing to simplistically explain anything that happens, Miller points out to us that this is one tragedy that it isn't easy to wrap up and move on from. Go and see it for its fantastic performances, and leave ready to find out more about the remarkable story of du Pont and the Schultz brothers.

(5 - a powerful and compulsive reality check)...

Awesomeness öööö – powerhouse performances across the board

Horror öö – foreboding overall and one shocking act of violence