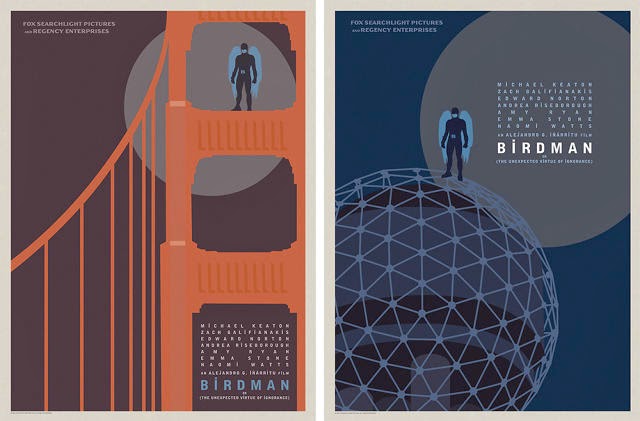 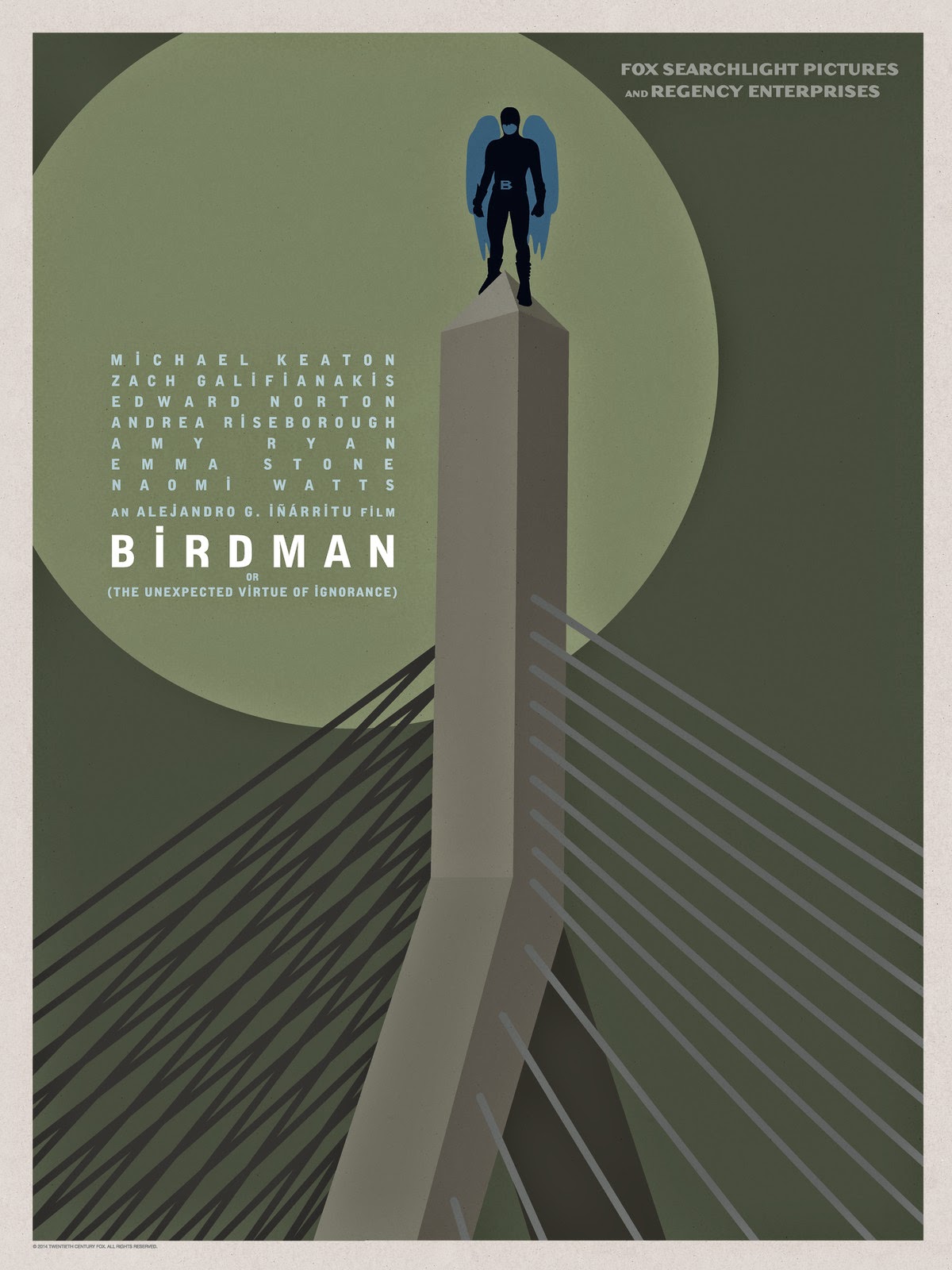 If Birdman had been released 2 days earlier in the UK, then it would have been my favourite film of 2014.

No question. It's that good.

And this is why you should go see immediately it before everyone else does and it stops being cool. But, if you're worried about coming across as clueless and unintelligent, never fear as Darkmatters is here to help out and give you the tools to appreciate Birdman even more:

The Director:
Alejandro González Iñárritu has the sort of back catalogue as director that would make you think it would be appropriate to go along to the cinema with violin in hand, ready to play along with the upcoming depressing moments. With films such as Amores Perros, 21 Grams and Babel to his name, he is not perhaps the sort of person that you'd want at your hospital bedside to cheer you up. He is however, the sort of director who it's cool to drop into a conversation about how he's inspired you to look beyond the self or coming to terms with your own mortality. Thankfully though Iñárritu has managed to locate his funny bone and produce the superb Birdman for us, so I'd suggest mentioning how you liked him before everyone else even knew who he was or how to pronounce his name (ih-nyar-ee-too).

Cool thing to say to your friends:
"Throughout his work, Iñárritu seems intent on exploring the darkest parts of what it means to be alive in the ever shifting 21st century. This has been reflected in the variety of techniques utilised in his work, from multi-stranded narratives in Babel, to the intense handheld approach to 21 Grams. Having said this, Birdman feels like his most complete, brutal and innovative piece of art thus far."

The Cast:
If you're going to portray a washed-up actor who enjoyed early success as a Superhero actor, but in the intervening 20 years since has faded off into somewhat obscurity - why not be completely brutal about it and hire the real life version of it in Michael Keaton AKA Batman? So here the Mexican writer/director finds Michael Keaton in hair-raisingly (quite literally as he removes his wig) good form as an accentuated, egotistical and yet surprisingly sympathetic character named Riggan Thompson. Keaton is on quite fantastic form and turns in a career best performance. It's been awhile since it has felt like there has been such a raw performance on screen from an actor, and Keaton is quite simply perfect in this film. The rest of the cast is equally superb with Andrea Riseborough and Amy Ryan acting as the current and past love interests that Thompson seems intent on destroying. Both play key parts to his and the plots developments, and pop up to remind him and up of the future he doesn't want and the past that he squandered. Seemingly intent on stealing the show however, is Edward Norton who in parallel to Keaton, portrays a character that doesn't appear too dissimilar to the tabloid impression of him on a film set. Norton has a fine time chewing up the scenery (metaphorically of course) and delivering his lines with real relish. The real heart of piece however lies with Emma Stone and her portrayal as Sam, Thompson's daughter and assistant. Always present yet emotionally distant, her presence is a constant reminder to Thompson of his greatest failure and his redemption, if any, would surely come through her. Stone also delivers my favourite monologue of the whole film which is below:

Cool thing to say to your friends:
"Of course the in-joke regarding Thompson staging Raymond Carver's short 'What We Talk About When We Talk About Love' is that no-one in their right mind would think to repurpose it for the stage!"

The Look:
Iñárritu, along with cinematographer Emmanuel Lubezki (who did some fine work in Gravity) and editor Douglas Crise (who created a modern divisive masterpiece in Spring Breakers), has constructed the film that feels so claustrophobic and fast paced that it gives the strong impression that you're viewing one continuous shot. And whilst this isn't the case, meshed with the thumping jazz soundtrack and growing drumbeat, you'll be hard pressed to see many cuts. With the orange walls and backstage vibe, the film never stops with conversations appearing to take place in lengthy single takes. Indeed, the camera barely sits still, constantly on the move as our actors move from one cramped place to the other. This works to dizzying effect and you'll finish each scene breathless as if you were walking and talking with the cast.

Cool thing to say to your friends:
"Much like when watching Hitchcock's Rope, it's rather hard to clearly see where the cuts take place during the scenes. I'd suggest that we just throw our hands in the air, declare it a a triumph of digital filmmaking and move on."

The Lingering thoughts:
There is a fantastic scene in Birdman where Keaton discovers that his daughter Stone has been adding ink dashes to toilet roll in order to help suppress her urges to use drugs. Stone tells her father how each dash represents a period of time that the earth has existed, before handing him the last tiny strip and stating that is how long humans have existed for. It's a poignant moment, that is quickly interrupted as Keaton blows his nose on that piece. Indeed, if we were to get philosophical, it's as if in his search for truth in the 21st Century, Iñárritu is blowing his nose on the great mess that our society is in. In its search for truth, Birdman reduces human civilisation to ink dashes on a sheet of toilet paper, before blowing its nose with this great ungodly mess that we (society) have created.
Another fantastic exchange takes place later on with Keaton and the critic who is intent on destroying his play, the snarling Lindsay Duncan. Whilst defending his play, Duncan leans and in and exclaims the thoughts of many people today: "You're not an actor - you're a celebrity." And perhaps this is another message that Iñárritu is keen to get across. Being relevant today is a big topic, and in this the film gladly takes on blockbuster actors (with real people named!), celebrities, actors, social media, trending, propaganda, critics and our saturated entertainment. Yet - despite all of this, Bridman never moves into cynical territory, always appearing hopeful that perhaps things can change. There are of course many other themes, such as our desire to succeed, to be loved and to amend for past failures, and of course what to do with the great big talking Birdman that is following us around, but to explore all of those now would be enough to fill a book.

Cool thing to say to your friends:
"Whilst I commend Iñárritu's desire to explore the complexity of the human psyche - I can't help but feel that it would have been better if more things had blown up... you know... like in Transformers."

Final thoughts:
Birdman is the sort of film that requires repeat viewings, there is simply too much here to take in on one viewing alone. And so I commend you, before everyone else sees it, and before it gets buried in the release schedule of upcoming Hollywood Blockbusters, make time to go see Birdman. It may just change your life.

Read the Darkmatters review of Birdman HERE
Posted by Matt Adcock at 5:04 pm

Great article Matt, and a truly great film. Sadly, this film is released too early in the year and will probably be forgotten, along with Keaton's performance, by the time award season comes around. The film increased in intensity all the way through until until towards the end it was almost unbearable. I was so close to the edge of my seat I fell off it, twice.

Whoops, that comment was meant to be under your review, not Tom's.

What do I know? The Oscar nominations are almost upon us apparently. My excuse, I was very
drunk