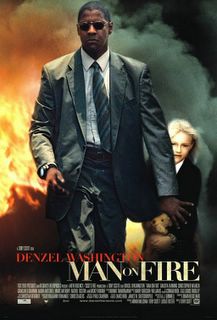 "you have to get the DVD - if only to see the original 'Kaboom!!' ending, it is very very satisfying"

“A man, can be an artist in anything. In food, whatever... it depends on how good he is at it. Creasey's art is death... and he's about to paint his masterpiece...” So says Christopher Walken about Denzel Washington’s character ‘Creasy’ in Man On Fire and it pretty much sums up the plot.
Man On Fire is a pulse pounding, nitro injected, ultra violent revenge thriller directed by an ‘on fire’ Tony Scott. It is a story of two halves; in the first you get a wonderful relationship study as the broken and dispirited Creasy is slowly won over and taught how to feel again by the little girl named ’Pita’ who he is paid to protect. Needless to say that things do not go to plan and this sets up the second half, which is where Creasy dishes out some seriously heavy-duty retribution on the scumbags who abduct his new friend.
Pita (played by superstar in the making Dakota Fanning) is a cute pixie who would melt any washed up ex marine’s heart and when she is abducted you are right there with Creasy urging him on as he makes those who hurt her suffer. And it does get very grim at points – it’s not an 18 certificate for nothing – Creasy cuts off the fingers, shoots, stabs and blows up most of the criminal underworld of Mexico in his one man quest for revenge. But he does it with style and although much of it is undeniably gratuitous – it also feels ‘right’ thanks to Denzel’s authority and unswerving commitment to his task.
Both Washington and Fanning really sparkle here – you feel that she is the daughter he never had and that chemistry is an absolute joy to watch. Denzel delivers possibly his best ever performance and could well bag another Oscar to go with his one from Training Day. Fanning also deserves serious praise (she’s already an accomplished actress and she’s only 10) – I can't help but predict big things for her so look out for her in Spielberg’s War Of The Worlds!
Man On Fire is a very classy film, I’d say it’s a ‘must see’ (providing you have a strong stomach) – but even if the thought of violent retribution leaves you cold I recommend going to watch the first half!!
As Creasy says of his enemies: “Forgiveness is between them and God. It's just my job to arrange the meeting.”
Amen brother…
Darkmatt Rating: öööööö (ultimate) 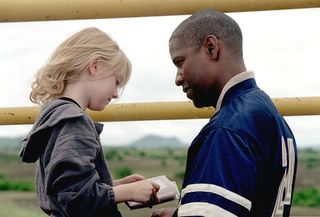 "Thanks for wiping out all those scumbags Mr Creasy"
Posted by Matt Adcock at 10:45 am