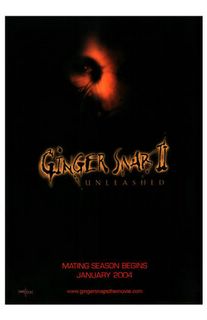 "the girls with serious facial hair problems are back"

Reviewed by Matt Adcock
I've always been a fan of monster films and werewolves are a staple of the genre. Alas their films have spanned the extremes of the brilliant (American Werewolf In London - benchmark for all hairy movies) to the utterly piss poor (Howling VII: New Moon Rising, which was a combination horror-film/country-western-musical!?).
Anyway, Ginger Snaps was an interesting teen girl becomes werewolf effort from 2000 - it became something of a cult classic (and if you see it you're unlikely to ever forget the sight of cute teenager 'Ginger' with the stub of a tail growing out of her back erruughhh...) Now the sequel picks up the story of Ginger's sister Brigitte (Emily Perkins) and it tries hard to be unsettling but is hamstrung by crappy monster effects - see below...
Apparently there's a prequel out now too which might be interesting and talk of making part 4 set on the moon... 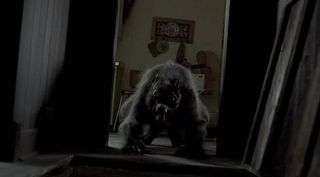