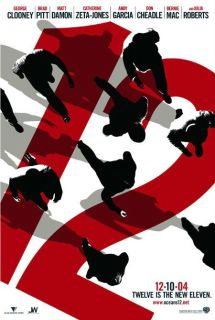 Twelve is the new eleven – literally and if ever there was a case of ‘let’s have some more of the same but with extras’, this is it... I can exclusively reveal the recipe director Steven Soderbergh probably used to make this follow up to his massive 2001 one smash hit crime caper:

First take some big stars (Clooney, Pitt, Roberts, Damon - actually all the original cast plus Catherine Zeta Jones and Bruce Willis for good measure). Next add some audacious heists (not just one big score at the end but throw in extra ones along the way and make it competition too). Then blend with a romantic subplot, some laugh our loud Hollywood ‘in jokes’ and smother it all over in cool, hip, trendy banter / fashion / scenery. Finally top with a superb French villain and voila… Ocean’s Twelve the perfect follow up to Ocean’s Eleven.
This really is a supremely amiable film – you’ll smile to yourself as to meet up again with the loveable rogues from the Ocean’s Eleven, you’ll let the super cool style and general gorgeousness of the cast wash over you in a completely unchallenging way. And then, unless you’re a very sad and bitter person with absolutely no love of cinema, you’ll be gently amused by the spectacle of so many of Hollywood’s finest having such an obvious laugh working together whist you get to sit back and enjoy the show.

So, it’s three years after Ocean and his gang ripped off casino owner Terry Benedict (Andy Garcia) in Las Vegas. Life is good – I guess that would have something to do with the $160million that they stole but everything changes when they are tracked down and given the choice of repaying the loot with interest in two weeks, or meet sticky revenge driven demises. Sexy Europol agent Isabel Lehiri (Zeta Jones) adds some headaches for the crew but nothing can prepare them for a showdown with a master thief known only as ‘The Night Fox’ (Vincent Cassell)…

Yes, luckiest bloke on the planet - Vincent ‘Dobermann‘ Cassell (he’s married to Monica Bellucci) – is one of my favourite actors and he almost manages to steal the show from under the noses of the big U.S. stars. But there’s just so much quality crammed into Ocean’s Twelve including a sublime cameo by another of my heroes - Bruce Willis, that you really should ignore the nay-saying critics and place your bets on Ocean’s Twelve ASAP.