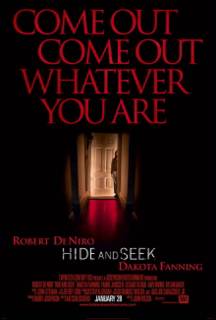 I have new friend named Charlie, we play all sorts of games but his favourite is Hide and Seek. Of course nobody can see Charlie, but that’s okay, because, what’s that Charlie? He says he doesn’t like me talking about him too much in case I give something away…
Yes we’re lost deep in clichéd horror movie land here with Robert De Niro playing traumatised psychologist David Callaway who awakes one evening to find his wife dead in their bathtub. So he does what any caring father would and moves to a huge scary house in the countryside so that he and his daughter Emily (the awesome Dakota Fanning from Man On Fire) can try to rebuild their lives. Only unfortunately it’s not just the house that’s scary. Firstly there’s the neighbours – a creepy bunch who are over friendly in a Rosemary’s Baby way and may or may not be child-abducting menaces. Then there’s the Sheriff who has a severe dislike of newcomers, and the estate agent who looks to have stepped out the pages of serial killers monthly. Add some nicely eerie surrounding woods that just reek of foreboding – note that dodgy looking cave entrance just out of sight of the house. And of course Emily’s imaginary friend Charlie who seems like such a great friend at first but does have a tendency to get angry, homicidally angry actually – sorry Charlie but I have to warn the readers…
Hide and Seek is competently made by John ‘Swimfan’ Polson, he slow burns the tension and build it up nicely to the point where you’ll be freaking out. Every staple horror film device makes an appearance – family pet liable to jump out at unexpected moments? Check, heh, nice pussy, don’t be scared. Large house that creaks, groans and has plenty of dark shadows? Check, complete with hidden doorway to the basement… Disturbed kid has an alarming habit of mutilating her dolls? Check – Fanning may only be 10 years old but she acts De Niro off the screen. And stormy weather, just when the action kicks off and the terrifying truth about Charlie is revealed? Oh yes, it’s all here – so if you’re after some quality chills and thrills, and don’t mind that fact that most of the plot devices have been used many times before, Hide and Seek is the film for you.
Oh and the killer twist? Sorry, Charlie says that I can’t tell you or he’ll be angry. 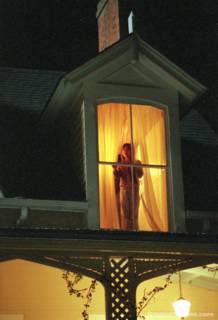