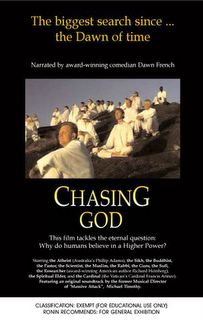 Why do humans believe in a higher power? Is there a God and if so have any of the world’s religions have got the depiction of the all-powerful being right or are we all seeking the same almighty authority in the end? These are the questions that Chasing God, a new documentary by filmmakers Dylan Burton and Lenny de Vries, attempts to investigate. Billed as “The biggest search since ... the Dawn of time” the film certainly had potential to be the ‘must see religious film of the year’, alas it is more of a curious novelty but still of interest.

By interviewing scientists, atheists, anthropologists and religious leaders from diverse faiths, in locations including India, Israel, Palestine, Italy, U.S.A. and Australia the documentary attempts to explore the motivations of humankind to believe in something bigger and more powerful than itself, all to a powerful contemporary ambient musical score by Michael Timothy (Massive Attack). Unfortunately, having Dawn French "The Vicar of Dibley" as narrator immediately sends mixed messages about the seriousness of the film, which addresses a subject matter rarely tackled frankly in mainstream media.

Chasing God is certainly a fascinating concept but where such as study could have delved, probed and endeavoured to find those who have ardently experienced spiritual reality or committed their lives to seeking the truth of what God might be – I felt that Chasing God was content to gently skim over the surface of the issue. This leads unsurprisingly to the conclusion that everyone is really worshipping the same God, just in different forms, apart from those who don’t believe and even then, those questioned here seemed ready to believe should compelling proof be forthcoming.

But because beliefs about God have divided humanity so bitterly throughout history, such a conclusion is highly unsatisfactory – I’m sure I’m not alone in wanting some more insight in to the ‘why’ even as the film highlights the fact that a paradoxical unifying principle that may well lie beyond the divisive interpretations of God. I felt that Chasing God did not qualify its justification for such a view sufficiently with the interviews presented. What is said on camera in small sound bites, linked by some of the most clichéd imagery ever to be committed to celluloid, only served to make me wonder what had been cut from the interviews in order to make them fit the narrative of the film?
It’s true that while science cannot prove or disprove the existence of God, ultimately it is either a universal truth or a mass delusion. In the absence of any verifiable proof, what we are then left with are personal experiences – and again the experiences on offer here feel very limited in scope. I was hoping to hear from people desperately searching, those who have lost their faith, those who have personal relationships with God, but what Chasing God serves up is a mixture of tales of those who have ‘felt a joyful feeling’ or ‘witnessed a great light’.
It has the feel of a Religious Education video that could have been entitled not ‘Chasing God’ but rather ‘Whatever you think God is (or isn’t), you’re probably right and we’re not going to argue with you’…
Chasing God will be screening at the ‘Screen on the Hill Cinema’ in Hampstead later this year, followed by a panel discussion comprising various high level religious leaders, a scientist and an atheist. For information about this and other screenings of Chasing God please see www.chasinggod.net
Darkmatt Rating: ö (unholy mess)
A version of this review ran in the Baptist Times

I hear the producers are now in pre production of the sequel.
They may call it "Chasing other myths".