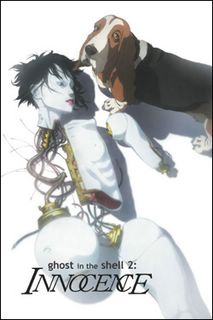 "If the dolls also had voices, they would have screamed, 'I didn't want to become human.'"

Reviewed by Matt Adcock
When machines learn to feel, who decides what is human...
In the stunning opening sequence of Mamoru Oshi's follow-up to his acclaimed anime Ghost in the Shell, we fly over a glowing, futuristic cityscape before descending into its labyrinthine streets. Here, hero cyborg Special Agent Batou (Akio Ohtsuka) pursues a murderous gynoid (a robotic sex doll - seeing as you asked) into a narrow alleyway. In an explosive confrontation, the doll attacks him, then self-destructs - and it all looks absolutely breath takingly beautiful.
So many scenes in Ghost in the Shell 2 could be framed and hung on the wall as acclaimed works of art - I can honestly say that I've never been quite as entranced by a film's looks... ever. You really should seek this film out, if only to witness the five minute 'parade' scene' (the sequence took a year to create), and is a tapestry of ornately decorated dragons, glowering demons, giant elephants and lion dancers. Beneath this massive cutting edge CGI spectacle scurry the hand-drawn figures of human spectators, dwarfed by the parade's Byzantine grandeur. The scene is utterly otherworldly, a space that is alive and yet nearly devoid of human presence as the hailstorms of confetti blend in the shadowy, inky reflections on the windscreens and windows of cars moving through future Tokyo (now a lawless city of sun-scratching spires, complete with a gothic cathedral that appears built out of old computer parts). And don't get me started on the villain’s lair, it is a Tudor manor constructed entirely of stained glass, where people, birds, and even fire are frozen in time.
Many films have looked at the increasingly blurred distinction between human, and machine. Innocence, takes this further and adds animals into the mix - a helicopter looks and sounds like a wasp, an airplane flaps its mechanical wings like a bird, and a submarine 'swims' through the deep with like a giant dolphin. Obvious references to Blade Runner and a host of sci fi specialities abound but there are also quotes from the bible, Milton, Confucius... There’s as much here to entertain your mind as your eyes. Plus some kick ass shoot-outs and a convoluted mystery.
What else can I say? This is essential viewing for anyone with a brain (be that human or machine)...
Darkmatt Rating: öööööö (ultimate) 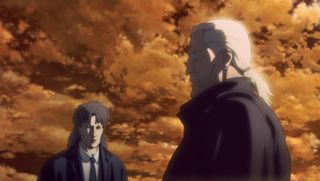 "hey mullet man, like my ponytail?"
Posted by Matt Adcock at 8:39 am

nice movie but gits 1 was best... i certainly hope they will do a 3rd part, maybe best of both ones...

im truly believe the great artwork did on this movie, the scenes, the movements, all... all is really made with love and patience... those scenes in 3d... fully colored... oh shit