Film Review: Revenge of the Sith 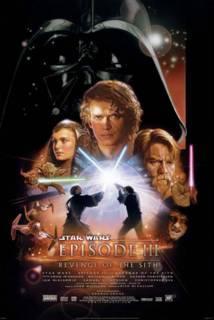 "Star Wars Episode III - putting the Force back on top!"


Powerful, is the lure of the dark side…

And so here it is, the final prequel, the culmination of the epic Star Wars saga, so many hopes are resting on this one, so many fears that it might be as duff as the first two prequels, can Lucas save the series with a glorious final part of the jigsaw or will it all end in tears and fan-boy recriminations?
I have to quickly declare an interest here – I am an unashamed Star Wars fan, I confess that I did name my firstborn son Luke with the express intention of being able to put on my best Darth Vader voice and tell him “Luke, I am your father”, so at least you’ll have some idea of how much I love the original trilogy…

But where to begin? Well this review may contain spoilers – if you’ve kept yourself completely ignorant of the plot (well done) and I will try to find time to post a spoiler free version at some point but don’t hold your breath. Read on with caution unless you laugh in the face of some plot spoilers…

The story picks up as the war between the Separatists and the Republic still rages and Chancellor Palpatine having been kidnapped by new kick ass baddie General Grievous (a robot / alien fusion that hunts Jedi for sport, wheezes like an asthmatic in a pollen storm and stalks about in a most excellently ‘evil’ way – oh and he kick butt too with his four lightsabers!!). Jedi Knights Obi Wan and Anakin Skywalker are sent on a mission to save the Chancellor and find that they must face off against wily Count Dooku too for added fun... From there we get to see the accelerated seduction of Anakin by the dark side of the Force, the destruction of the Jedi and the greatest lightsaber duel of all time – I tell you, cinema just doesn’t get much better than this!!

The truth is that the Force has never been as strong as it is in Episode III, and for me (still in the flush / daze of witnessing it) - Revenge of the Sith is the definitive Star Wars film… Lucas has delivered a megaton hit of movie wonder, that completes the saga in grand style and more than makes up for any disappointment the first two prequels generated.

“Revenge of the Sith is an endorphin rush of pure Star Wars pleasure - you owe it to yourself to see this film at least twice!! Star Wars once again rules the galaxy…”

There are so many beautiful scenes – from the jaw dropping opening space battle where huge spaceships exchange cannon fire like galleons of old whilst hundreds of fighters duel across the starscape, through to the spellbinding one on one battles of Obi Wan vs Anakin and Yoda vs The Emperor – it is all out entertainment. I loved loved loved some of the almost incidental scenes such as R2D2 getting to take down some Super Battledroids, Chewie giving Yoda an impromptu piggyback and the one little Jedi youngling who puts up some serious resistance when the clones try to execute order 66…

Damn, just thinking back over it makes me desperate to see it again and it hasn’t even been 24hrs since I saw it!! Repeated viewing is going to be necessary, especially as there are a multitude of cameos and film links to spot, look out for the Millennium Falcon, Grand Moff Tarkin and Lucas himself to name but a few.

The effects are the best ever committed to the screen. The still obvious ‘fakeness’ of Episodes I & II has been remodelled into a living, breathing galaxy far far away better than before. The fight chorography is savage, exciting and all out thrill inducing – the passion is back and for the first time since Return of the Jedi you will really care what happens to the characters…

The mum of one of my son’s friends asked me to comment on the suitability of Revenge of the Sith for children, and of course it hasn’t got that 12a rating for nothing. It is a dark tale of a good guy giving himself over to evil, of heroes being killed and the baddies winning the day. There are decapitations, legs are sliced off, as are arms, Jedi of all ages get slaughtered and although none of it is very ‘bloody’ – it is grim and quite upsetting in parts. Anakin gets literally reduced to a burnt and dismembered wreck before his famous transformation – and while I for one smiled as his girly locks caught fire – it might freak out sensitive youngsters and / or hairdressers. So my advice is – take your kids but only if you think they can handle it – it’s no scarier than Dr Who and it’s much more exciting!! I’ll be taking young Luke (who’s 8) but I don’t think James (who’s 4) will have the stomach for it on the big screen.

For adult appreciation – there is the whole moral judgement on Anakin’s decision to throw in his lot with the most evil mofo in the galaxy… Just what does it take for a guy to make a life choice like that? The answer (look away now if you don’t want to know) is obvious really – it’s a woman!! Yes, the underlying moral of Revenge of the Sith is ‘women can drive you to do the most insane things’ and Padme / Amidala is the case in point. If poor Anakin had never crossed paths with the minx from Naboo he’d have been the galaxy’s number one Jedi and the Sith would have been owned. You can almost hear Lucas in the background shaking his head and mumbling “Women eh?”

Of course there are things that some won’t like – and much of the acting is still plank wooden or wildly over the top to go along with the stupid dialogue but this is Star Wars and it’s never claimed to be high brow… Some will lament that we don’t get to see Vader do much once he’s suited up – but surely that's what we get in parts 4,5 and 6!!?

But even the Vader haters out there will have to get down on bended knee and acknowledge that Revenge of the Sith is potentially the most marvellous, entertaining and all round satisfying film to hit the screens this year… The Force is very definitely back and it rules!!

On the strength of this I just might call my next child ‘Yoda’... 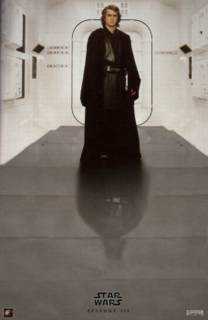 My Immediate Reaction and photo with Stormtroopers

Was Jesus A Jedi?

Your review makes me want to see it EVEN MORE!

I was trying to avoid the spoilers so a spoiler free one wd help!

My friend already let slip one bit which he says has been everywhere but I was still gutted!

Great review. And I think it's cool that you named him Luke. My boyfriend, even more fanatic than me, wants to name our kid Yoda. That might be a deal breaker...