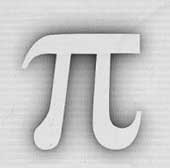 1. Chaos Theory can be generally defined as a description of the behaviour of forever-changing complex systems. Discovered by a meteorologist in 1960, chaos theory contends that complex and unpredictable results will occur in systems that are sensitive to small changes in their initial conditions. A common example of this, known as the "Butterfly Effect," states that the flapping of a butterfly's wings in China could cause tiny atmospheric changes which over a period of time could effect weather patterns in New York.
Although chaotic systems appear to be random, they are not. Beneath the random behavior patterns emerge, suggesting, if not always revealing, order. Recognizing that the stock market is a non-linear, dynamic, chaotic system Pi's Max Cohen applies the principles of Chaos Theory in order to determine the pattern behind apparent random nature of market prices.
2. Apart from the stock market, Chaos Theory can be used to model other highly complex systems, including everything from population growth to epidemics to arrhythmic heart palpitations. When applying chaos theory, it is revealed that even something as seemingly random as a dripping tap has an order behind it.


Welcome to the world of Pi.
3. In Manhattan, behind many locks, lives Max Cohen, a renegade mathematician . Since staring at the sun at age six, he's had terrible headaches; and can't abide human contact, he is obsessed with finding numeric patterns in everything - even the stock market - but his theories bring him to the attention of Wall Street traders and a kabal that wants to rediscover long-lost mathematical mysteries in the Torah. Max goes on the run as his hallucinations and headaches worsen. IS THERE A SOLUTION?
Pi is an awesome film - edgy, paranoid and disturbing but always brilliant, it really has to be seen and experienced... 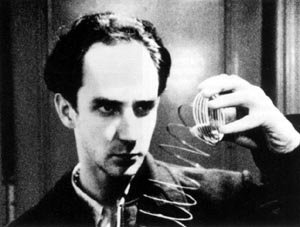 12.19pm: Footnote:
In case you're wondering: Kabbalah is an ancient aspect of Jewish mysticism dating back to the time of Moses.
Consisting largely of speculations on the nature of divinity, creation and the soul, Kabbalah is said to have originated from the oral law which Moses received from God. The principle root of Kabbalistic tradition is a belief in the divinity of the Torah (the first five books of the bible), and that by studying it one can unlock the secrets of creation.
The film not only deals with Kabbalah, but also with Gammantria, or the use of mathematics to unlock the secrets of the Torah. Ancient Hebrews used the alphabet as their numerical as well as there lettering system, therefor, each letter was assigned a numerical value. For example the Hebrew "A," aleph, is equal to one, while "B," bet, is equal to two and so on. Taking this into consideration, we can then convert the entire Torah into a large string of numbers. When these numbers are analyzed, patterns emerge… 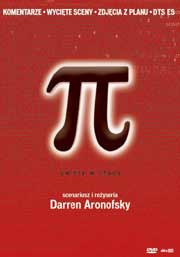 12.20pm:Personal note: "The Torah is just a long string of numbers. Some say that it's a code sent to us from God."

- Lenny Meyer (in the film Pi)