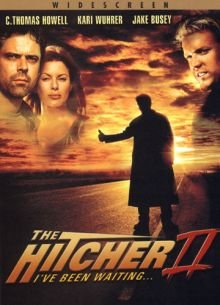 The Hitcher 2: I've Been Waiting
Dir. Louis Morneau
Reviewed by Matt Adcock
Ah The Hitcher back in 1986 eh?
Rutger Hauer in one of his 2 best roles ever, (the other being Blade Runner of course - can he add a third with his Sin City bit part this year?), anyway - there he was, all blonde hair, chilling eyes, charismatic smile and brutal violence. What could be better than a sequel in which C. Thomas Howell reprises his role from the original (Jim Halsey - the young guy who got terrorised by the Hitcher)? Not The Hitcher 2 alas, Hauer obviously couldn't be bothered to come back, so we get Jake 'Starship Troopers' Busey trying to fill the Hitcher's mean boots. I was fully ready and prepared to hate this low budget follow up which isn't a patch on the first film but found myself kind of enjoying in a masochistic way...
There are some competent moments, a nice explosion here and there, and Busey tries his best to be Hauer. Kari Wuhrer (she was Special Agent Tanya Adams from Command & Conquer: Red Alert 2) steps up as a plucky but crap action heroine and the plot is pretty much like the first film.
Is it worth seeing?
Only if you're an undemanding fan of the original or you just like duff sequels...
Darkmatt Rating: öö (poor) 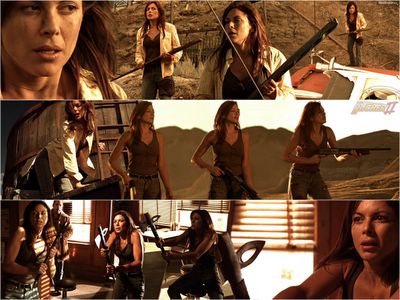 "Kari Wuhrer... you probably would, but you might not want her covering you ass in a fight" 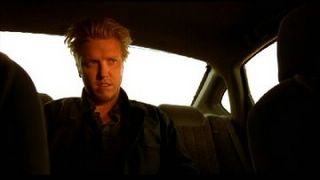 "hey you can almost see my career from the back seat..." 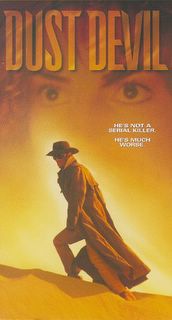 For a far superior tale of 'death in the dust' track down Dust Devil,
this classy little number from 1992 is hard to find these days but
I have fond memories of it!!
Posted by Matt Adcock at 8:34 pm