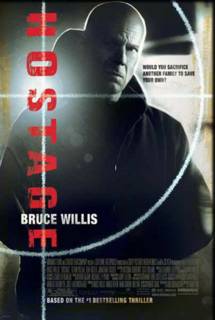 Bruce Willis... I love that guy (in a non sexual, macho kind of way),
he's delivered some of my very favourite films:

/ big grin spreads across Matt's face just thinking about those films and now it looks like 2005 will be 'Brucetastic' because not only will he own SIN CITY but HOSTAGE looks pleasingly action packed too - plus DIE HARD 4 has popped up on the horizon - now we're talking...

Some favourite Bruce Willis quotes - can you name the films?

"I am insane, and you are my insanity."

"Yeah, that's what your wife said."

"Just needed to do a couple of things. I needed to help someone. I think I did. And I needed to tell you something. You were never second, ever."

"Take this under advisement, jerkweed."

"Honey, since I left you, this has been without a doubt the single weirdest f**king day of my life."

"You should never do anything like this. You know that, right?"

Yes Bruce has certainly delivered some great lines over the years, made memorable I think by his mixture of gritty hardman determination, derisory wit and desperate human vulnerability. I know, Matt, that you couldn't mention every great line that has passed through those clenched teeth or wryly smiling lips, all the brilliant one-liners in Die Hard could fill your blog on their own, but I do think that there a few more that need mentioning.

STEALING THE BOOTS OF THE BADGUY HE'S JUST SHOT - "A million terrorists in the world and I kill the one with feet smaller than my sister."

WHEN TOLD HE IS USING A CHANNEL RESERVED FOR EMERGENCY CALLS - "No fucking shit, lady! Do I sound like I'm ordering a pizza?"

I could go on but I have sudden urge to watch a film...

WHEN ASKED HOW LONG HE SPENT IN PRISON - "Let's just say, I never saw E.T."

One last Bruce moment from the excellent The Fifth Element(1997)

I excitedly await his new releases. Mikey B.