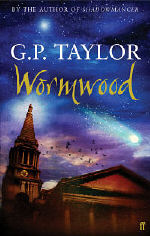 I always try to read at least one book a month – and this year I’ve kicked off with a book entitled ‘Wormwood’ which details the events around the coming of a world-killing comet called ‘Wormwood’. Prophecy and magic mix in this 18th Century, London based tale as characters struggle to contend with some seriously weird and wonderful events. Ghosts rub shoulders with angels, witchcraft runs rampant and brutal killers return from the dead – absinth is used to entrap innocents, seedy old men chase teenage virgins and demons stir up all sorts of trouble. As you can probably tell, it’s written by a Christian author: G.P Taylor who also wrote Shadowmancer. Taylor is a vicar who turned author in his late 30’s and is now a millionaire thanks to the film rights being sold to his books… Which is exactly the route I plan to follow in the coming years so stay tuned (apart from the vicar bit)…
Did you know ‘wormwood’ – the bitter drug is rumoured to have grown in the trail of the serpent in the Garden of Eden? Or that it is also the name of the comet foretold in the book of Revelation (chapter 8 verses 10-11)…

Anyway, Wormwood is a cracking read and I take my hat of to Mr Taylor in what he has accomplished. Now, I must finish DARKMATTERS!!

I thought it was very dull and even less cohesive than Shadowmancer. He has this annoying habit of changing the scene just when one is beginning to develop and to hold your attention, and so you never really become involved by the plotline. His books feel to me like someone who has watched a film and rushed home to get as much of it down as possible, without recapturing the nuances and smaller details that made the film work in the first place. More than anything else, Taylor is a highly effective self-publicist, and this has propelled him as far as he's got. Shame there's not an ounce of charisma there. And may he have a long and prosperous career, just don't tell me he can write, and that his work will be anything more than a distant memory in twenty years time.

I am a teacher in a prison, and I have been reading my students one chapter a day from Wormwood - I have gone from about 75% attendance before starting wormwood to 100% attendance because my students are on pins and needles waiting to hear what comes next. I think they could have left out the eating of walrus eyeballs, but other than that it has been an enthralling journey.