Film Review: Without a Paddle 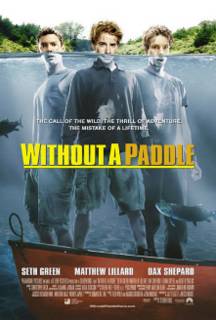 Without a Paddle (12A)
Dir. Steven Brill

2005 is here and Without a Paddle kicks off another year of film viewing with a sorry tale of three friends who go upriver in a canoe looking for a lost cash bounty. The ‘legend’ goes that a skyjacker named DB Cooper baled out of a plane somewhere ‘in deep country’ over the American northwest with $200,000 strapped to his back, and was never heard of again. So childhood pals Dan (Seth Green), Jerry (Matthew Lillard), and Tom (Dax Shepard), who are now in their 30’s, take up the challenge of searching for the lost money when the fourth member of their old group - Billy (Anthony Starr), dies.

You can see the comedy potential here, cross films like Deliverance and Dude, Where's My Car?, and you get… Utter unbelievable rubbish that fails to raise more than a couple of smiles and makes a strong contender already for ‘worst film of the year’…
The action is limp, the jokes are really not very funny and just about everything that happens is completely predictable (as it’s all been done many times before).
What’s also depressing is that this is the first to qualify for the New Zealand Government's "Large Budget Grants Scheme" where the film-makers receive up to 12.5% of their production budget back. If they watch this film they’ll probably scrap the scheme straight away!

I did like Seth Green’s C-3PO impersonation when things go wrong and I couldn’t help smiling at the sheer audacity of using the well worn joke when they meet a grizzly bear - Dan says: “What are you doing?” Jerry replies: “Taking off my shoes… Because I run faster with no shoes.” Dan says: “You can’t out-run that bear!” and of course Jerry replies: “I don’t have to out-run the bear, I just have to out-run you!” Well ho ho ho…
Throw in an almost menacing sheriff, a couple of earth loving hippie babes and the obligatory angry rednecks and top it off with an ill advised cameo by Burt Reynolds, maybe trying to recapture some of the coolness from his role in Deliverance more than 30 years ago…

Just don’t bother – there are much better films out there including House of Flying Daggers, which really is a breathtakingly awesome oriental masterpiece. Also looking good this year are: The Aviator, Sin City, King Kong and of course Star Wars: Revenge of the Sith… 2005 looks like being another cracking year for film fans!!