Every Prophet in his house - Carnivàle 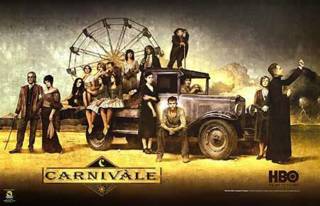 Into each generation is born a creature of light and a creature of darkness.
So it is in 1934, the ‘last great age of magic’, in the American dustbowl, a fugitive named Ben Hawkins takes up with a traveling Carnivàle. The Carnivàle is owned by the mysterious and unseen “Management”, who has designs on the young Hawkins, for the boy has an untapped gift: he can heal the lame and raise the dead – but it comes at a price. Ben also finds himself disturbed by cryptic and prophetic dreams, which he shares with a Methodist preacher in California, Brother Justin Crowe. Brother Justin, convinced he is following God's will, has begun to practice his own extraordinary talents, although the preacher's plans increasingly lead to disturbing and tragic consequences. In this "last great age of magic," Ben Hawkins and Justin Crowe are moving toward a great conflict between Good and Evil, although it not yet clear on which sides these men will stand.
Can I just say that I LOVE this series, it satisfies the ‘itch’ I’ve had ever since Twin Peaks for a quality and mysterious TV show. Carnivàle has exactly the right amount of freakiness and some of the best characters ever to grace the screen – how can you not love Brother Crowe when his sermons go like this:

The clock is ticking, brothers and sisters,
counting down to Armageddon.

The worm reveals himself in many guises across this once great land; from the intellectual elite cruelly indoctrinating our children with the savage blasphemy of Darwin, to the craven Hollywood pagans, corrupting them in the darkness of the local bijou, from the false prophets cowering behind our nation's pulpits to the vile parasites in our banks and boardrooms and the godless politicians, growing fat on the misery of their constituents.

The signs of the end times are all around us, etched in blood and fire by the left hand of god. You have but to open your eyes, brothers and sisters. The truth is that the
Devil is here.

The Anti-Christ, the Child of Lies, the Son of Darkness walks among us cloaked in the flesh of a man.

Does the Lord not weep at this degradation? Does He not tremble with righteous fury?

And shall he not seek retribution?

All I can do is urge you to watch it –TV may never get this good again.

I leave you with the words of Samson (manager of the Carnivàle – played by the 'Man from Another Place' i.e. the dwarf from Twin Peaks):

On the heels of the skirmish man foolishly called The War to End All Wars, the dark one sought to elude his destiny, and live as a mortal. So he fled across the ocean to the empire called America.

But by his mere presence, a cancer corrupted the spirit of the land.
People were rendered mute by fools who spoke many words but said
nothing... for whom oppression and cowardice were virtues... and freedom, an obscenity.

And into this dark heartland, a prophet stalked his enemy. Until,
diminished by his wounds, he turned to the next in the ancient line of
light. And so it was that the fate of mankind came to rest on the trembling shoulders of the most reluctant of saviors...

Carnivale rules. Definitely ranks as my all-time favourite TV show, alongside Alias and Twin Peaks. Just a damn shame it had to end so prematurely...

every prophet in his house, what does this signify exactly? my only thought is ben's gift, lost in the turmoil of brother justin's, "house?"