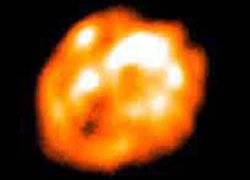 The BBC reports that "Astronomers have discovered an object that appears to be an invisible galaxy made almost entirely of dark matter.
The team, led by Cardiff University, UK, claims it is the first such object to be detected.
A dark galaxy is an area in the Universe containing a large amount of mass that rotates like a galaxy, but contains no stars. It was found 50 million light-years away using radio telescopes in England and Puerto Rico.
Very little is known about "dark matter", even though there is much more of it in the cosmos than "normal", or baryonic, matter, which constitutes the visible material from which stars and planets are built.
We only know of dark matter's existence because of its influence on ordinary matter.
Scientists can infer its presence by looking at the rotation of galaxies and measuring how fast their visible components are moving."
HHhhhmmmm... I have this theory...
Posted by Matt Adcock at 1:48 pm