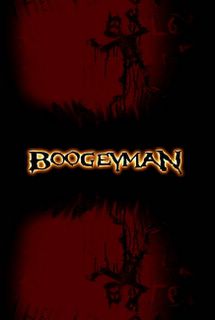 For fifteen years, everybody told me I was making it up. Everyone said it was just a story. There's no such thing as the Boogeyman. But I was right - and here's the cinematic proof... Unfortunately it's just another perfunctory horror effort - low on scares, nastiness, gratuitous anything... Kind of poor show really.

Even the 'creature' looks ropey - not much better than the dreadful Creeper from Jeepers Creepers 1&2... The plot disappears up it's own backside after an averagely spooky and almost entertaining first hour.
Got to admit that I was hoping for more – seeing as this is from Sam Raimi's Ghost House production company who made the much scarier Grudge remake last year.

Any good points then? Well – there are some decent ‘ooh, what’s behind the door’ build ups and some nicely shot scenes. Plus I could really relate to the kid at the beginning looking round his room at night and getting freaked by the things there that look so much more sinister in the dark (yeah okay, I was a wimpy kid).

I think that the creature in the closet should contact it’s agent – Boogeyman in the end undoes a lot of the good work that House (still one of my favourite horror comedies ever) did in making people actually think twice before opening that dark closet door.

The BBC called this one right with their line: "AN ENDLESS MONTAGE OF STUPIDITY" 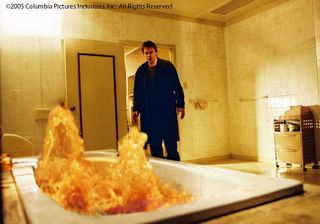 "Hey, the blob remake isn't scheduled for a while yet... move along"
Posted by Matt Adcock at 9:35 pm