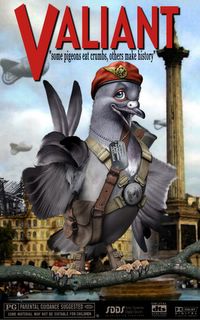 
Is it a bird?
Is it a plane?
No it’s, Super…oh hang on I’m pretty sure that IS a bird – but not just any bird… That’s Valiant – heroic CGI wood pigeon, bravest of the brave, one patriotic little Brit who will stand up to the might of the Nazi hawks and try and save the day.

If you’re hankering for something a bit different, something to amuse the kids, make you smile and tickle your ‘proud to be British’ buttons then look no further. You don’t even have to like pigeons very much, but thanks to the excellent voice talents of Ewan McGregor, Ricky Gervais, Tim Curry, John Cleese and Rik Mayall – to name but a few – you could well find a small place in your heart for them anyway.

Bizarre as it might sound, this is a thoroughly ‘old fashioned’ digitally animated comedy telling the story of a little pigeon named Valiant (McGregor). Valiant is a Nemo like runt-of-the-litter who overcomes his small size to help the Allies war effort by flying vital messages across the English Channel, whilst trying to avoid being eaten by the enemy's falcon brigade.

Based on the ‘real life’ Royal Homing Pigeon Service whose birds won more than 30 medals during WW2!? Valiant might be choc full of patriotism, clichés and bodily function gags (care of Gervais’ Bugsy) – but it also serves as a salute to the role that homing pigeons actually played in the war.

Try as it might, Valiant probably isn’t going to trouble the likes of the mighty Pixar or out gross the latest flash CGI film - Robots (which also has a character voiced by McGregor). But Vanguard productions have put a lot of heart into their film and it’s hard not to be swept up in the ‘bunch of unlikely misfits get entrusted with the big mission’ excitement.

Tim Curry is great as Von Talon, the lead pigeon menacing Nazi falcon, and Gervais pretty much steals the show as reluctant hero Bugsy who provides most of the comic relief. As the Brentmeister himself explains: “I have always wanted to be a big mouthy bird!” and that’s exactly what Bugsy is…

So the first 3D CGI film to be produced in the UK, turns out to be a hit, it’s a feel good, family friendly treat that deserves to be seen.
Darkmatt Rating: ööö (Tally Ho!!)

Read my interview with one of the 'Valiant' stars: Matt Adcock Meets Ricky Gervais
Posted by Matt Adcock at 11:03 pm

Like your reviews, by the way. "Valiant" hasn't opened in Europe yet. I think France is premiering at the end of the month.

"So the first 3D CGI film to be produced in the UK, turns out to be a hit, it’s a feel good, family friendly treat that deserves to be seen."

Opening at number 5 and lukewarm to disasterous response is hardly what anyone would call a "hit."

Ah, see that's limiting it to a financial definition... Although it did make over a £million in it's first weekend which is more than many films do in the UK.

The 'hit' I was talking about is that it was a hit with me and my son who is desperate to see it again...