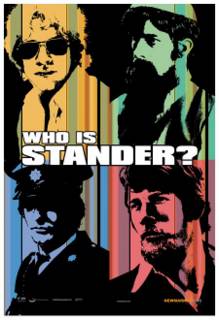 "You're Scheming On A Thing; That's Sabotage"

Stander is cool crime caper based on the true story of André Stander, a South African homicide/robbery police captain who became one of the most notorious bank robbers in the country.

Thomas ‘The Punisher’ Jane plays the lead and obviously has a lot of fun as the cop who decides to defy the system and goes on an audacious crime spree; robbing banks during his lunch hour then returning to the scene of the crime to lead the investigation.

He gets taken down by his cop colleagues and jailed – and it is his speech in front of the court which highlights his dismay at being part of the oppressive system which sees him having to shoot and kill a black protester: “I'm tried for robbing banks. But, I have killed unarmed people.” To which the Judge replies “That is not the business of the court.”

It doesn’t end there – in jail Stander gets to know Allan Heyl (David O'Hara) and Lee McCall (a great turn by Dexter Fletcher). After a daring jailbreak, the 'Stander Gang' – looking for all the world like the Beastie Boys in their Sabotage video - go on a top robbery rampage. Their crimes get increasingly bold – even returning to a bank to rob it again when they hear the manager boasting that he had a second safe hidden…

So, loved by the public, their blatant disregard for authority makes them folk heroes and enemy no. 1 of the State.

Stander is a great film – it shows the issues of the time in a powerful way and ramps up enough robbery action to satisfy crime fans. It has a fun vibe too, some of the most wicked moustaches you’ll ever see and characters that you can’t help being sucked in by. A classy soundtrack helps nail this as a film really worth checking out when it opens at the end of May in the UK.
Darkmatt Rating: öööö (top drawer)
Posted by Matt Adcock at 12:44 pm