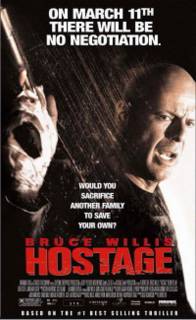 There will be no negotiation, Bruce Willis is back, back doing what he was born to do – run around looking worried whilst stylishly blowing baddies away and I for one am very happy!!
Ever since Die Hard (incidentally my favourite film), Bruce Willis has been the ‘everyman’ action hero of choice. If you’re in a jam with serious bad ass criminals, be it robbers, assassins or even intergalactic tyrants he’s the ‘the guy’ you’ll want on your side. So if your family were ever to be taken hostage by scumbags and it looked like gunplay would be necessary, Bruce should be the only call you make.
So here’s Hostage, the first English language film of hotshot French director Florent Siri. You might not have seen his last film ‘The Nest’ - it was a tense action thriller that covered similar themes (fear, mental suffering, empathy, cowardice). Anyway, Hostage is another deliciously dark tale of crime and retribution – you know how it goes – dumb but dangerous kids take family hostage, then realise that they may have gotten over their heads when it turns out that the dad is actually the accountant for a seriously shady bunch of crims. Bruce plays local Sheriff Jeff Talley who used to be a hostage negotiator but was dismissed for letting a young family get butchered by one of the kidnappers he failed to ‘talk down’.
Things get more complicated when the shady crims take Talley’s family hostage and force him to try and retrieve something from the under siege house. It’s a good set up but it wouldn’t have worked as just a standard Hollywood ‘production line’ action film. This is why Siri is directing – he’s definitely ‘one to watch’ because he lovingly creates a film that oozes style, brutal violence and has characters that you can’t help finding interesting.
I know it’s not everyone’s cup of tea but I found it refreshing to see baddies who are prepared to actually follow through on their actions without stopping to worry if they’re upsetting the viewer. Hostage must push the boundaries of what can be allowed in a 15 certificate film, nobody is safe: Friendly black female cop? – shot repeatedly in the back as she tries to crawl away. Cute kids being held at gunpoint? – BANG BANG, not any more… The only limit on the perps behaviour here is that the main psycho (Mars) played superbly like some demented Crow wannabe by Ben Foster is a more of a gentleman than many deviants might be when obviously attracted to the teenage daughter he has tied to a bed. But hey, it’s violence not sex that Hostage brings to the party and it does it with style.
From the first second of the credits I just knew that I was going to enjoy Hostage (I’m a bit of a credit freak and get angry when I see lazy title sequences) – the opening titles here are presented a Sin City comic book style - the camera zooms around, in and out of a stand off scene. They are the best I’ve seen for a long time and really worthy of note. And then from the moment that the happy hairy (and old looking) Bruce is replaced by the charismatic bald avenger hero Bruce, the film never looks back. Willis is great and he works here without one of his usual weapons, his trademark one-liner funnies. But don’t be alarmed; Hostage really isn’t the place for glib off the cuff banter, everything that goes down is meticulously crafted to further the dark mood that envelops the action like a particularly dark night.
Credit should go to most of the cast, Foster delivers an iconic teen psycho, 17 year old Michelle Horn lives up to her name as the daughter in peril and Kevin ‘voice actor from Ewoks: The Battle for Endor’ Pollak is good as the dad. But this is Bruce’s film and he should be proud of it, he should also work with Siri again if he gets chance as the guy is quality and I can’t wait to see what he does next!!
Finally – this all bodes well for SIN CITY which is still my tip for film of 2005 (and yes I know there’s Kong, Sith, Narnia, Potter and Batman out there!!)
Darkmatt Rating: ööööö (tasty violence - welcome back Bruce)
Click here to read: Matt Adcock's Other Film Reviews 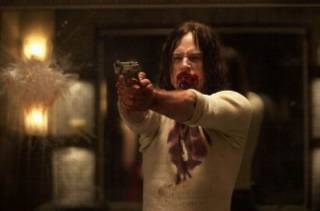