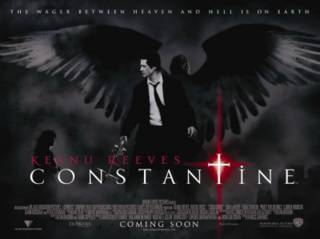 What if I told you that God and the devil made a wager, a kind of standing bet for the souls of all mankind? Or that Heaven and hell are right here, behind every wall, every window, the world behind the world. And we're smack in the middle?
No, wait, come back… this is Constantine a full on, effects heavy adaptation of the comic book ‘Hellblazer’ – if you can imagine the unholy love child of the Matrix and the Exorcist then you’ll have some idea of what to expect.

“Whoa dude…” Keanu Reeves plays John Constantine, a chain-smoking ‘freelance exorcist’ – originally a blonde scouser based on Sting - who goes around kicking the butts of evil demons (equipped with a ‘holy shotgun’ and an annoying expendable sidekick). Alas, Constantine’s is not a happy lot, doomed to an eternity in hell because of a botched suicide attempt – love that Catholic dogma - he has taken on his demon busting duties in a bid to win back some favour with God.

Anyway, things get a little bit complicated when his path crosses with Angela Dodson (the gorgeous Rachel Weisz) who is trying to find out why her twin sister committed suicide. He also meets the Angel Gabriel (Tilda Swinton) who tells him in no uncertain terms that he’s a goner – it’s most unnerving to see the Christmas messenger swearing like a trooper and doing dodgy deals with demons. In fact Constantine plays so fast and lose with the entire biblical theology that it carves itself an interesting niche in the ‘battle between heaven and hell’ depictions. Oh and there’s another subplot about the fabled ‘Spear of Destiny’ which leads to some more crunching special effects, plus of course Satan himself (Peter Stormare) pops in for a scene stealing face off towards the end.

It’s all a bit grim – sweaty exorcisms, electrocution, drowning, wrist-slashing and much demon melting / blasting / banishing. It’s by no means a classic, but Keanu and Weisz go about it all with conviction, so if you’re after something dark, different and stylish then Constantine certainly delivers a diverting couple of hours.

For a much nicer, ‘family friendly’ trip to the cinema – you could always try the cool new British animation Valiant (full review next week). As Ricky Gervais, who voices one of the main characters, told me at the Premier in London, “it’s basically a film about courage, bravery and friendship but with pigeons.” 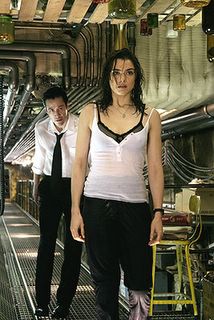 how good Rachel W looks in a wet white vest"