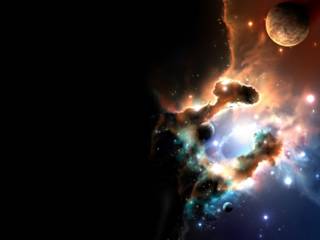 "A brief history of Dark Matter"

Human, the top of the evolutionary chain, here we are then on what turned out to be just a tiny planet in very huge cosmos. A planet that we humans have managed for the most part to completely wreck. From here we searched and scanned and mapped and planned further and further into the unknown, all the while committing ourselves to being a smaller and less significant fraction of the ever expanding universe.
Then to make matters worse we discovered that our best scientific technology was so limited that we could not even detect 99% of what is actually out there. That 99% we term Dark Matter and once we knew it was there - it was an invitation to us to crack its secrets. So here we are indeed riding on a tiny tiny spec in only 1% of everything that we could fathom. Step up to the L2 Dark Matter Collaboration and one of their official GOV briefings… “So, to restate our assumptions and initial findings: Dark matter is believed to comprise over 90% of the Milky Way and perhaps up to 99% of the Universe as a whole. A great deal of this matter could be in the form of cool stars, planets and black holes formed from collapsed stars. Origin track-backs however put serious limits on the levels of ‘conventional matter’ that this can be composed of and so we surmise that other candidates are heavy slow-moving particles known as WIMPS (Weakly Interacting Massive Particles) that have been drifting through space since the Universe began…”

Commissioned to spend unlimited funding over an unending timescale (as long as it took) - it wasn’t a complete surprise when the L2DMC finally made a break-through. The limited number of people allowed access to the knowledge welcomed it with various levels of enthusiasm.
“About fucking time” was the first high-level official GOV reaction - having already poured over 300 billion standard dollars into the project. Arch Prime Minister Carter allowed himself a moment of reflection before issuing his commands. Safe to say that the hush hush pre-brief regarding the preliminary findings didn’t go down well.

Findings such as these come along only once in history… and were of such significance that they changed absolutely everything. The government’s panic first manifests itself when the group assigned to pre-brief them are eliminated immediately after delivering their report.

“This is seriously need to know stuff we have here” quipped A*FUL the GOV ‘Bastard Level’ assassin bot reviewing the illegal copy it had made into its hard data storage area before expertly dispatching the scientists with its built in large calibre weaponry.

As soon as the preliminary findings briefing finishes, aware that the public will not know how to take the news (and that the media won’t hesitate to use the data in the most sensational way), Carter orders that everyone from the L2DMC be liquidated.

A*FUL reports to Commander Riichardson, the GOV’s head of robotic armed forces (a human who actually preferred the company of his metallic soldiers to that of other people). “The scientists have got to go – shall I dispatch them Sir?”

“No I’ve got it covered”, you can stand down.” Commander Riichardson had anyway long been expecting something of the sort and had taken the liberty of rigging the entire L2DMC labs with micro thermo nuclear charges – so he fired up his access chip, logged into the denotation sequence and then paused... “A*FUL did you catch any of the briefing?”
“Sorry Sir, I would be admitting to something highly irregular and completely illegal if that were the case.”
“So… How much do you have?”

I'm guessing at this point that you too might be curious as to what are these damn preliminary findings are?
Well, blinking away miles below the surface of L2 the L2DMC lab screens are displaying the first mapped segment of Dark Matter. Think about that for a minute - this is what we’ve never been able to see before; this is humanity’s first peek through a very large looking glass. And the sensational thing that warranted the immediate and brutal death of the experts who cracked this breakthrough?
There is something staring back at us from the other side.
Other extracts from Darkmatters the novel by Matt Adcock: